Former captain Tim Paine will not be in Hobart for the Ashes Test he advocated so strongly for, and there are growing doubts the Scott Boland magic show will see a third act this week after his heroic performance in Sydney.

In a sad twist to one of the biggest weeks in Tasmanian cricket history, one of the state’s favourite sons Paine is on holiday interstate and will remain there when the Ashes caravan rolls into town, according to a source with knowledge of the matter.

Paine has kept a low profile since taking indefinite leave from the game in November just days after the revelation of a sexting scandal which cost him the Test captaincy. 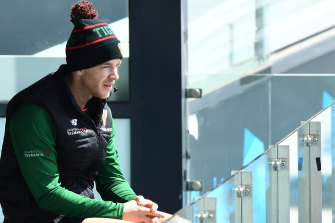 Tim Paine will be on holiday interstate when Tasmania hosts its first Ashes Test.Credit:Getty

He had been invited as a guest at an official function hosted by Cricket Australia and Cricket Tasmania, while radio station SEN reached out through an intermediary for him to be part of their commentary team.

Former Test teammates as well as the Australian Cricketers Association have remained in touch with Paine during the series. As The Age reported in November, players are upset at what they perceive to be a lack of support from head office in times of trouble.

There is still much discontent within Tasmanian cricket circles over the treatment of Paine, as CA’s top brass is likely to find out at functions during the Test.

“We’re creating trust between the players and the governing body, and that’s a big part of that. We took some steps backwards in that scenario, that’s just being brutally honest.”

Boland is in a race to be fit for the fifth Test starting Friday, after playing through the pain barrier to almost bowl Australia to a last-gasp victory at the SCG.

The paceman required the aid of painkillers to get through the final two days after jamming his elbow into his ribs in a nasty fall on the cusp of tea on Friday.

While pain relief will help Boland get through the Ashes finale, it is not known how many overs he will be able to deliver. At some point he will need to rest to heal the injury, which coach Justin Langer described as to the cartilage between his ribs.

Selected to be the workhorse who could bowl high overs on unforgiving tracks, Boland would be unlikely to play if there are any restrictions placed on him by medical staff.

The sixth fast bowler picked this series by Australia, two-Test Boland has the stunning numbers of 14 wickets at 8.64 – the lowest of any male Test cricketer with a minimum of 10 victims.

Underlining his faith in the newcomer, captain Pat Cummins threw Boland the ball in the closing overs, only to be robbed the chance for a shot at glory by fading light.

With speedster Jhye Richardson also under an injury cloud, unlucky paceman Michael Neser is in the frame should a change be made to the pace attack.

The writing is on the wall for opener Marcus Harris, who is poised to lose his place to the SCG twin centurion Usman Khawaja. Returning No.5 Travis Head said Harris remained in good spirits despite the speculation over his Test future.

“Marcus is an amazing character, he has huge energy within the group, you’ve seen that in the way he fields and the way he is around that field, and you can hear that over the stump mics,” Head said.

“The energy on the field is exactly the same off the field, and he’s calm, consistent. He’s himself, and he hasn’t changed that – he’ll be disappointed he didn’t get runs in this game. I felt like he lined it up well and played beautifully and set a really good platform, him and Davey as a partnership.”