Concussed Test aspirant Will Pucovski will need to face down his "fears" in the nets but has been backed to rebound in time for the Boxing Day clash against India.

Pucovski has been ruled out of this week's opening Test in Adelaide after he misjudged a short ball and was hit on the head in a tour match at Drummoyne Oval. 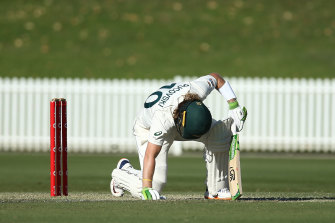 Will Pucosvki suffered another concussion while playing for Australia A.Credit:Getty Images

The emerging strokemaker will need to prove he has overcome the concussion before he is allowed to return to the nets and begin the process of regaining his confidence and touch.

Former Australian opener Chris Rogers, who took several heavy blows to the head in his career, including a particularly nasty hit in the Lord's Test of 2015, said Pucovski would benefit from having more than a fortnight from when he was hurt until the second Test – should he be selected to debut in front of his home Melbourne crowd.

"Time is gold. From my own experience, you just need a bit of time to get over it, and then get back in the nets, almost go through your process again, face your fears down a little bit and almost get back on the horse," Rogers said.

"Every day is going to count for him. And now he has a bit more time to prepare for [the second Test in] Melbourne, that's going to help. He's been through it before and keeps coming out the other side, so he's definitely shown resilience around it."

Pucovski found himself in an awkward technical position when hit in the head in the latest setback to the 22-year-old enjoying higher honours.

Rogers, the Victorian state coach, has worked closely with Pucovski on helping him deal with short balls, and declared the man who lit up the Sheffield Shield season with back-to-back double centuries was more than equipped to handle a bumper barrage.

"I know he's done so much work on playing the short ball and he just made a mistake. Sometimes you don't always get it right," he said.

"But what people might not know is he played a couple of Shield games and they tried to bounce him from almost the 10th over, for his whole innings, and he got two double hundreds.

"So he has actually been playing that short ball pretty well – he just made one little mistake. But I think he has enough confidence in what he is doing, that if he had that opportunity [to play Test cricket], he'd be able to go out and take on the Indian bowlers."

Former Indian captain Sunil Gavaskar has warned Pucovski he can expect to be peppered with short balls by the tourists should he be awarded a baggy green cap.

Pucovski has suffered nine concussions through cricket and his junior football days and has had mental wellbeing issues, the latter forcing him home early during the Sri Lanka Test series of 2019, and prompting him to remove himself from international selection on the eve of last summer's series against Pakistan.

Fellow Victorian opener Marcus Harris – he and Pucovski posted the biggest partnership in Sheffield Shield history earlier this summer – has been added to the Test squad and is hoping to reactivate his international career in the pink-ball Test, potentially alongside Joe Burns at the top of the order, although the Australians have other options.

Australian team doctors are also monitoring boom all-rounder Cameron Green, who suffered a mild concussion when hit in the head during his follow through while bowling on Friday in a pink-ball warm-up clash against India at the SCG.

"That would be great if he was available. The way he's been going about it has impressed everyone and, with so many injuries at the moment, if he can put his hand up and be in the right position, then you never know what might happen," Rogers said.