Neither Cristiano Ronaldo or Nick Kyrigios were at Warwick Farm on Wednesday but “Siuuu” echoed around the Liverpool track as James McDonald came back on the heavily-supported Dajraan.

The 30-year-old has elevated to the top of the Australian riding ranks and punters have responded by putting him on the 21st century’s sporting pedestal. 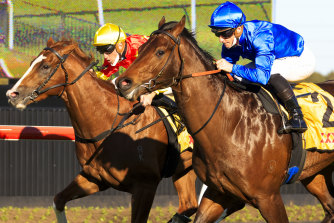 James McDonald sails down the outside to win the Run To The Rose on Anamoe in the spring.Credit:Getty

“I thought they were booing me,” McDonald said. “That’s pretty cool if that was what they were doing.”

McDonald dominated the spring, winning The Everest on Nature Strip, the Melbourne Cup with his favourite Verry Elleegant, and also breaking the record for winners across the Flemington carnival.

He is in demand and influential, and his autumn juggling act will keep both himself and manager Mark Guest on their toes from now until The Championships in April.

It will start with star three-year-old Anamoe in Saturday’s Expressway Stakes at Rosehill, but the future includes Verry Elleegant, Nature Strip, Home Affairs, Zaaki and boom unbeaten filly Espiona, which all arrive at the Rosehill barrier trials on Monday.

Not all will be able to have McDonald in the saddle for their morning practice hit outs, but he will be there come race day when possible.

“It’s a nightmare, but a good nightmare,” McDonald said. “To be associated with so many good horses is what you dream about. It’s getting it right that is going to be hard.

“We haven’t made any decisions yet. We’re keeping an open mind, and we’re waiting to see how they all come up. Monday will be fairly important.”

McDonald has five group 1 wins for the season and with the right decisions in the next couple of months that looks sure to rise.

He could join elite company by riding more than 10 top-level winners in a season, and challenge the Australian record of 13 group 1 wins for a season. Hugh Bowman and Shane Dye jointly hold that record.

He is very good. He is a proper horse

His focus remains more immediate for now with Saturday a building block towards the autumn. Anamoe looks for group 2 victory against the older horses while McDonald will start the process of finding another Golden Slipper with Great Barrier Reef and Ojai in the Canonbury Stakes and Widden Stakes respectively.

Anamoe’s toughness is matched by his ability. He hasn’t missed a big dance in his career being third in the Blue Diamond, Golden Slipper runner-up and the Sires Produce Stakes winner, with McDonald in the saddle.

His spring included seconds in the Golden Rose and Cox Plate, both results that could have turned if luck went his way, and winning the Caulfield Guineas.

“He is very good. He is a proper horse,” McDonald said before reuniting with him for a fourth time on Saturday.

Anamoe’s reputation has him a $1.65 favourite, so expectation weighs heavily on him like many of McDonald’s rides.

Earlier in the day, McDonald has another odds-on chance as Great Barrier Reef makes his debut in the Canonbury Stakes.

“I’ll be interested to see how he handles it,” McDonald said of $1.4 million son of I Am Invincible, which will face a handful of rivals.

He will also finally get to ride Ojai, in the Widden Stakes, after being impressed by her in barrier trials in the spring and earlier this month.

“I rode her before she won [the Kirkham Plate] in spring and really liked her and what she did, didn’t surprise me,” McDonald said.

Ojai went on to run third in the Golden Gift behind Sejarden and Shalatin, which are both more prominent than her in Golden Slipper betting.

“She has just got a smooth action and she seems to do it without much effort,” McDonald said.