Champion jockey and trainer Gary Moore says there'll only be one boss in his stable after his training partnership with brother John became official in the race book on Tuesday.

John, 70, a legend in Hong Kong with seven training premierships, will join Gary at Rosehill in October but the duo will have their first runner at Royal Randwick on Saturday, where Gary believes they can kick-start their partnership with a win. 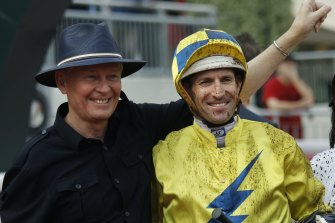 The Moores boast some of the most enviable records in world racing.

The sons of legendary Australian jockey George Moore, Gary followed in his dad's footsteps, becoming a champion jockey in France and then a seven-time premiership-winning jockey in Hong Kong. To this day, he remains the only Aussie hoop to win the time-honoured Prix de l'arc de Triomphe. He then took up training, winning Macau's champion trainer eight times before becoming a group 1-winning trainer in Australia.

Meanwhile, in Hong Kong, there are few bigger names than John Moore. Having won nearly every big race in the jurisdiction, and training some of the absolute champions like Able Friend, Beauty Generation and Werther, John was forced into retirement in Hong Kong earlier this year due to his age.

But Gary is looking forward to teaming up with his brother soon.

"Dad would be very proud we're joining up in partnership, but there's only one boss and that'll be Brother John.

"We're both very competent. We've been champions in our own right but Brother John brings a wealth of experience. We're gearing up for his arrival into Australia at Rosehill now. We're making adjustments in the stable at Rosehill to suit his way of training and the horses look fantastic.

"He's got great ideas. He's a great feeder, has got great foresight. He's trained some wonderful horses and putting both of us together, it should go really well down here." 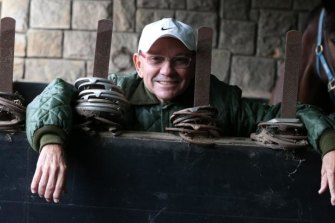 Among their small stable of 21 horses, Crack On Crack On shapes as a spring carnival prospect. The Hong Kong Derby placegetter hasn't raced since bowing his tendon following the March 2019 race, but the stable has nominated him for Melbourne's triple crown races.

"He's holding numerous nominations, of course for the Cox Plate and the Caulfield and Melbourne Cup," Gary said.

"At the present moment he's going to run on the 12th of September in the Theo Marks.

"We were very pleased with his trial yesterday [Monday]. He's a horse that has a lot of potential but suffered an injury in Hong Kong when he ran third in the Hong Kong Derby, and he was favourite for the Britannia Stakes at Ascot. He's a very nice horse.

"He pulled up well after yesterday but definitely if these races are to be considered, whether Brother John [decides if he] goes to the Epsom, that's in the air."

Meanwhile, the duo can claim their first win as 'John & Gary Moore' at Royal Randwick on Saturday with progressive sprinter-miler Petronius, who Gary said would be hard to beat after winning a trial on Monday.

Gary said the stable would likely be requiring more boxes in the near future.

"If we're unable to be allocated anymore boxes at Rosehill, we're going to have to look to another training facility to lease boxes because we've got a lot of horses on the books thanks to Brother John and we need to be able to bring those horses into training," he said.

"We could always look at a place like Hawkesbury. We could look at the Gold Coast, but racing in Victoria and NSW is just so good."