Australia's dire troubles at the top of the order could see David Warner return in a win-or-bust approach in Sydney and leave him in major doubt for the series decider in Brisbane.

Warner, 34, revealed on Saturday that he is "highly doubtful" to have fully recovered from a groin injury come the third Test against India at the SCG, beginning on Thursday, and a final call on whether he plays will only be made once he can prove to himself he is not a liability in the field. 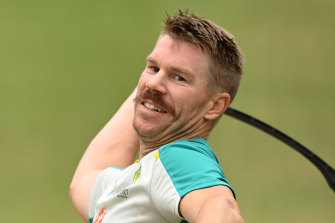 David Warner says he is unlikely to be fully fit for the Sydney Test but may still play.Credit:Getty Images

His absence from the opening two Tests forced the home side into a makeshift opening combination of Joe Burns and Matthew Wade, the former axed after a largely miserable campaign.

Warner's return would be a boost on several levels. His record of 7244 runs at 48.94 speaks for itself, but the manner in which the pugnacious left-hander takes on the opposition with a career strike rate of 72.85 should give the Australians the platform they have been missing. 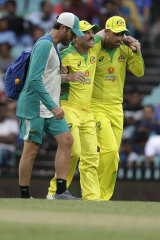 David Warner is helped from the field by David Beakley and Glenn Maxwell during the second ODI in November.Credit:AP

Warner has not played since straining his groin while fielding in the second one-day international on November 29. Come day one in Sydney, he will have had a full 38 days to recover.

Having had a couple of "jabs" and turned to a hyperbaric chamber and spot cryotherapy to enhance his recovery, Warner said on Saturday that training sessions over the weekend would be pivotal in he and the team's fitness staff making a final call.

He said he was prepared to adjust his batting style, that being limiting his "drop and run" manner, but fielding was another question.

"If I feel like I can do my duties, whether it's stand in the slips cordon, take catches to my right and my left, not be a hindrance in that aspect as well in the field, cause it's 50 per cent [of time in the field], I think that's probably where it's going to determine whether I do play or not," he said.

"I know I can manage the running between the wickets. I know I can manage the shot making that I have but it's whether or not I have the capacity of catching the balls left and right of myself. Even with 'Gazza' [Nathan Lyon] bowling – am I going to field at first slip or leg slip – I have got to be agile enough to make sure I am taking those chances.

"If I am not, given that 50 per cent of the time we are out in the field, I don't want to be dropping those chances and not giving our team the best chance of taking them."

The Australians have spoken in recent days about needing to find a way to handle the tourists’ tactics of forcing their opponents into offering injudicious catches on the leg side, the result of attacking the home side's stumps. Their persistent line has turned scoring into a battle, for the Australians have averaged only 2.4 runs per over in three completed innings, including a miserable 1.96 in the second innings in Melbourne.

While Warner has a relatively modest career average of 36.03 against India, he averaged 53.37 in his last home series against the tourists in 2014-15 and boasts on overall career average in Australia of 65.94, and 66.54 in eight Tests at the SCG.

"What I will say is that if you allow very good attacks, which both of these teams have, if you allow them to dictate on their terms and you don't apply any pressure, then it becomes difficult to score," Warner said.

"I think in the last two Tests, probably from both teams, there has been that lack of urgency up at the top and trying to take it to the bowlers a little bit, and having that intent. You don't need just with scoring runs. It's the loud calling, it's the way that your shoulders are back, you are in the bowlers' face, you are trying unsettle their line and length."

Uncapped opener Will Pucovski is also pushing for a Test call-up, having been declared symptom free after the ninth concussion of his young sporting career.

Warner said he was prepared to open alongside Wade, Pucovski or Marcus Harris.