Victorian Premier Daniel Andrews was holding out hope there could be some crowds at major events this spring when he unveiled his road map out of stage four lockdown at the weekend and Racing Victoria boss Giles Thompson still believes there is some chance that small numbers could be allowed on track during the spring carnival.

But he is not kidding himself that a return to normality – when 100,000 racegoers routinely thronged Flemington – is going to return any time soon. 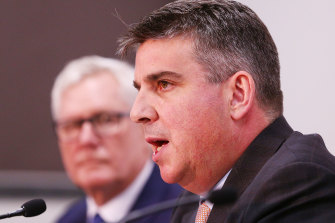 "We have still got time to go by. Everyone is being realistic, there's not going to be big crowds or thousands and thousands of people on racetracks this spring, that reality has hit home," Thompson told RSN radio yesterday.

"What the discussions are now about is what opportunity is there for owners, sponsors and some members, to get them on course. That's where we should focus. We are talking hundreds and low thousands, not tens of thousands. Crowds is a very broad definition.

"The big crowds are gone. The question is what can we do for those owners who we would dearly love to have on big days. We won't give up until the door is firmly closed on that and we will be working with the government on that."

Thompson said the situation could be slightly different at country race meetings, where many rural and provincial clubs stage their major meetings and Cup carnivals during the spring.

But again he remains realistic. While restrictions in those areas might be easier, the cost of allowing people in and ensuring biosecure protocols were met might be prohibitive for cash-strapped country clubs who have generated little or no income from paying customers for months.

"Even though a club might be allowed to have some people there, can it cope with it? Can it afford to do it? Some of the smaller clubs may say we just can't afford to open up the doors," Thompson said.