Seven West Media has been dealt a huge blow in its fight against Cricket Australia, with an independent arbitrator finding the network is entitled to only a small discount to its rights fee this season.

Seven had asked for a $70 million reduction from its annual $82 million cash and contra deal to cover the game but a binding independent assessment found the network can recoup just $5 million, according to a source familiar with the matter. 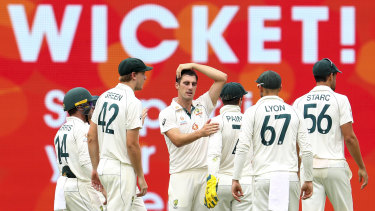 Seven and Cricket Australia are at loggerheads over TV rights.Credit:AP

Despite the threat of the pandemic and several outbreaks around the country over the summer, Seven was able to deliver on its full international men’s season against India and the respective Big Bash Leagues.

An average linear TV audience of 1.14 million watched the four-Test series against India, up 4.1 per cent on last year, in the highest rating non-Ashes Test season since 2014-15. There was also a 25 per cent spike in ratings on subscription TV.

The 492,000 average audience for the one-day international series against India, including Kayo and Foxtel’s streaming services, marked a 77 per cent rise from the last series between the two nations here in 2018-19.

The timing of the ODIs, however, was a sore point for Seven, as the network does not have rights to the limited-overs matches.

It is arguing the launching of the men’s international season with white-ball matches denied it the opportunity to promote its coverage of the Tests and the BBL.

The Test summer has traditionally started before the BBL but the schedule this year was flipped due to the pandemic.

Seven’s chief James Warburton fired another shot at CA on Monday, saying it was “dissatisfied” with the administration.

Though privately furious with Seven over its strongarm tactics, CA has let the game do its talking having made good on its promise of delivering its side of the deal despite the unprecedented circumstances.