Home » Sports News » ‘She’s not a walk-up start’: Perry’s days in T20 side could be numbered, says Sthalekar

Australia great Lisa Sthalekar says the days of Ellyse Perry being an automatic selection in the national team might be over, as one of the most recognisable faces in the game closes in on her international comeback on Sunday.

The idea of a fit and available Perry not being in the Australia side may seem fanciful to many but not to four-time World Cup winner Sthalekar, who is worried by the all-rounder’s moderate scoring rate with the bat and slim pickings with the ball. 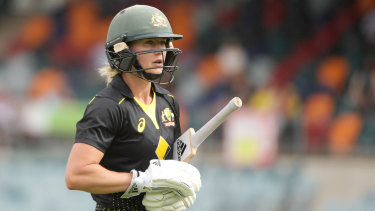 How much longer will Ellyse Perry remain an automatic selection in Australia’s Twenty20 team?Credit:Getty

Australia’s players are due to leave quarantine on Saturday before taking on New Zealand in a Twenty20 in Hamilton on Sunday, the first of two white-ball series.

Perry is most vulnerable in the shortest format, where it’s arguable that her form with the ball is more important than what she produces with the bat. But, on the comeback trail from hamstring surgery, Perry is more advanced with the bat than the ball, which should not come as a surprise given the heavier stresses bowling places on her body.

Her eight wickets at 34 in last summer’s WBBL were in keeping with her overall record in the tournament, though her economy rate of 8.25 runs an over is well up from her league mark of 6.8 and 5.86 at international level.

Perry, who has implemented a new run-up during the summer, was also well below her best in the Women’s National Cricket League, her two wickets coming at 76.5. Her state and national captain, Meg Lanning, gave her just 30 overs in the six games, while another international returning from injury, Tayla Vlaeminck, bowled 31 overs in four matches.

The runs have flowed for Perry with the bat, though she was the only player in the top 10 run scorers in the WBBL to score at less than a run a ball, striking at 96.5, down from her career mark in the tournament of 104.2.

Her batting is not an issue for coach Matthew Mott, who said during the week he felt Perry was nearing her best, though he will be acutely aware of the competition for places in the team. 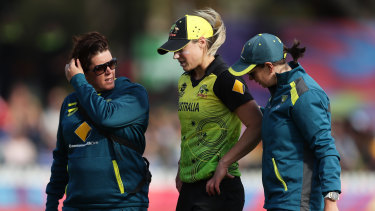 Ellyse Perry is on the comeback trail from injury.Credit:Getty

Perry’s technical soundness and ability to bat through an innings is best suited at the top of the order where she is up against the leading run scorer from the 2020 World Cup, Beth Mooney, the explosive Alyssa Healy and skipper Lanning.

Ash Gardner provides a point of difference with her heavy hitting and Rachael Haynes has become a dependable middle-order batter who has shown an ability to accelerate the scoring when required.

If Perry cannot add more power to her game to justify a middle-order berth or rediscover her best with the ball she may struggle to hold down a place in the team, particularly at a time when Australia want extra bowling depth.

“They don’t see her in the top four, that’s gone now,” Sthalekar said. “She’s not a walk-up start. In 50 overs, Tests, you absolutely pick her, but T20 has always been her weakest format.

“I’ll be interested to see if they make some tough calls. One thing I have known, Matthew Mott and Meg are very driven in the way they want their team to play. They may make that tough call and it might send the right message to her that she’s got to get a move on.”

The next T20 World Cup is not for another two years, but there is an Ashes defence next summer, which in the women’s game is fought on a points system across the three formats.

Sthalekar said if Perry was dropped the pressure would be on her and the Sydney Sixers to rethink their approach next season to give her the best chance of success at the top level.

“Her role for the Sixers was just to bat the whole innings and you have all the firepower coming in,” Sthalekar said. “That wasn’t necessarily the best thing for her to keep developing for the Australian side.”