Cricket Australia faces the prospect of not seeing tens of millions in unpaid rights fees even if it wins a protracted legal battle with debt-ridden Seven West Media, which has escalated its threat to walk out on its $450 million contract to cover the game.

The dispute could land in the Supreme Court in Melbourne as early as next Tuesday, with Seven planning not to pay the $25m instalment due that day after filing a breach of contract notice with CA over the governing body’s proposed summer schedule. 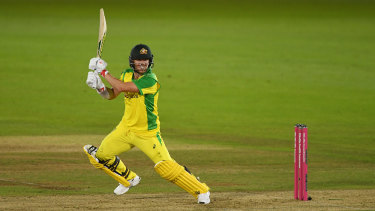 David Warner hits out during Australia’s tour of England.Credit:Getty Images

CA’s interim chief executive, Nick Hockley, rang Seven CEO James Warburton on Friday seeking to resolve the stand-off but with the network showing little sign of backing down, the likelihood of the broadcast war heading to court increases by the day.

CA, which is being advised by law firm K&L Gates and several senior barristers, maintains it is on solid ground if it delivers a full schedule this season but Seven is equally confident its claims of a diminished product this year represent a breach of its deal.

Sources familiar with the dispute say that if it does go to court, CA would sue Seven for damages amounting to the difference between the network’s $82m-a-year agreement and the value of deals it could strike with other broadcasters such as Nine and Ten if they picked up Test cricket and the Big Bash for a lower price.

A source with knowledge of Seven’s position, however, warned that even if CA won, it could take more than a year to run its course and the network’s debt arrangement with eight banks meant the game might struggle to get hold of the money anyway.

While Seven and Foxtel’s next payment deadline on Tuesday looms as a key date – the News Corp-owned pay television company is due to outlay $33m – it is not the only one of note that is fast approaching. It is also only a fortnight until Seven is supposed to screen the opening international of the summer, the first of a women’s series between Australia and New Zealand in Brisbane on September 26.

Whether their production trucks, staff and commentators will make it to Allan Border Field is also right now unknown.

Seven has given CA until three days before that T20 international to respond to its breach notice, which sources in cricket have read as being the media company’s latest effort to secure a significant discount on rights fees it paid too much for in 2018. If it hasn’t already reached court, the matter could then drag on for months in mediation and arbitration.

Whatever the case, CA is staring at the damaging reality of being without a free-to-air partner on the eve of the season. The range of Seven’s objections, from the quality of Big Bash players who will be available to the impact on crowds of a travelling BBL roadshow and the flipping of the schedule that has placed limited-overs matches against India before the Tests, leaves CA hard placed to find a resolution beyond significant cash relief.

There is a price adjustment mechanism in the contract which Seven believes should give them a markdown if the quality of the season is affected but CA contends it can only be activated when the volume of matches is impacted, such as the number of Tests per summer, which can change from year to year.

“Cricket Australia remains in ongoing discussions with the Seven Network about delivering a compelling summer of cricket,” a spokesman said on Friday. “CA is committed to fulfilling its contractual obligations to all its partners this season.”

Seven’s failure to pay any or all of its next instalment and the tearing up of its contract would be an alarming development for the game, although it would not in itself be an existential threat to Australian cricket. Sources in the game say CA had cash reserves of $60m at the end of June and it also sought a $50m line of credit from the Commonwealth Bank.

But a Seven termination would accelerate a rights fees reset that could have major flow-on effects for state funding, community cricket and, ultimately, the salaries of players, who at the top end are paid more than $1.5m a year.

The effect for Seven in discarding cricket is that it would be without a major summer sport to promote its programs and help it contend for top billing in revenue share.

Having already written down the value of 50 per cent of its cricket rights, though, Seven argues having no cricket would leave it in a more profitable position than paying full freight for a diminished season.