A superb bowling spell from Stephen O'Keefe led the Sydney Sixers to victory in the Sydney derby at Manuka Oval on Wednesday night, increasing their lead at the top of the Big Bash ladder.

The Thunder finished on 6-166 after their 20 overs and a rain delay meant the Sixers needed to chase a revised total of 129 off 14 overs. 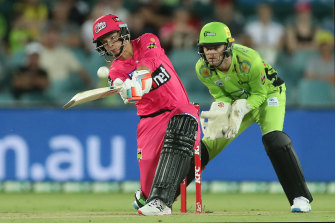 Josh Philippe taking on the the Sydney Thunder bowlers at Manuka Oval.Credit:Getty

A stellar knock from Josh Philippe, who was finally dismissed for 64, pushed the Sixers over the line with eight balls and five wickets to spare.

The match began with a shaky fumble from the boys in magenta. A misfield by wicketkeeper Philippe handed the Thunder five wides to start the day and left many questioning whether the Sixers were nervous.

Manuka Oval has been the closest thing to a home ground for the Sydney sides this season due to COVID-19 rescheduling. The Thunder had played five games at the venue this season before Wednesday, winning four of them.

But even at their temporary fortress, the Thunder couldn't capitalise on the Sixers' early nerves. 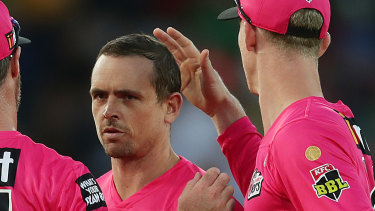 Opening batsman Usman Khawaja, who has been unshakable in partnership with Alex Hales in recent weeks, was dismissed for two by Jackson Bird. The departure had every Sixer on the field grinning from ear to ear.

The wickets continued to fall.

Captain Callum Ferguson departed for just three before Sixers star bowler O'Keefe stepped up to the crease. He took no prisoners.

First, he sent Sam Billings to the sheds for 15 and then took the crucial wicket of Hales (54) just before the 10-over break. O'Keefe struck again to dismiss Alex Ross, finishing with figures of 3-15.

Hitting four off the final ball to finish 50 not out, Sams gave the Sixers a respectable target of 167.

With a rain delay during the break, the chase was reset – and the Thunder refused to go down without a fight.

Justin Avendano was sent for 17 and a slow ball from Cutting dismissed James Vince for seven. Young star Tanveer Sangha showed the depth of his potential again, dismissing skipper Daniel Hughes for seven at a crucial point in the match.

The weight on Philippe's shoulders resulted in a last-minute scare, with the youngster bowled in the second-last over, but he was still the Sixers' hero.

Carlos Braithwaite finished the job, hitting a boundary with eight balls to go.