Ellyse Perry concedes she still has a long way to go to return to the physical condition she was in before undergoing hamstring surgery last year, just days before her comeback to international cricket.

Twelve months after her World Cup dream was shattered by injury, Perry is set to make her return to the national side for the Twenty20 series in New Zealand starting on Sunday. 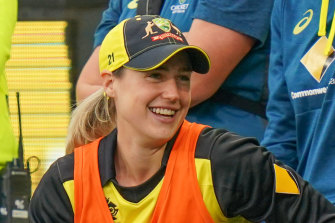 Ellyse Perry is due to make her return to international cricket on Sunday in New Zealand.Credit:AAP

The star all-rounder has steadily improved with the bat to the point coach Matthew Mott believes she is not far from her best, but her bowling remains short of the level that made her one of the most feared seamers in the game.

Perry used her lengthy layoff to tinker with her run-up in a bid to generate more power through the bowling crease, but it is taking time to return tangible rewards on game day, which is not unexpected given the gravity of her injury and the improved depth in playing ranks.

Her numbers in the WBBL, eight wickets at 34 at 8.25 runs per over, were modest, and she failed to take a wicket in five of her six WNCL games for Victoria, her two victims coming at the cost of 76.5 runs apiece.

“Throughout my rehab process I saw that as a great opportunity to work on a few different things – one of those things was improving the efficiency of my run-up to give me more balance and power at the crease,” Perry said on Thursday.

“That was a bit of a work in progress. Bringing into the first round of competition matches at the start of WNCL I didn’t expect it go smoothly.

“The first couple of games against NSW wasn’t perfect or ideal with my run up but since then it’s been great because I’ve been able to iron it out. It feels fine now and improved from 12 months ago since I got injured.”

Perry did not play for about seven months as she recovered from surgery but was able to have an uninterrupted domestic season to build confidence in her body and get used to the stresses of competition.

“I think from a broader picture it’s taken me the best part of 12 months to feel like I’m back to full playing fitness and performance levels in terms of recovering from my hamstring and not playing a lot of cricket,” Perry said.

“By no means was I close to where I was when I got injured in the WBBL and I’m probably still a work in progress.”

The reigning world champions have taken on board counsel from their male counterparts on how cope with the intensity of competition after two weeks of training in quarantine.

The exercise bikes set up in the hotel room of each player is a reminder of the additional challenges of playing international sport during a pandemic.

“They are few and far between at international level at the moment,” Perry said. “We’re not taking any of it for granted. It’s such a limited opportunity to be together because of how much is going on with logistics, just the opportunity to go overseas and play cricket is something we’re very fortunate to be doing.”