Surrey coach Gareth Batty hailed his side after they clinched the county championship with a round to spare – then warned that a 10-game competition, proposed by Andrew Strauss’s high performance review, would ‘diminish the emotion’ of victory.

Surrey wrapped up their 21st title with a 10-wicket thrashing of Yorkshire, having learned half an hour earlier that Hampshire – their only rivals for the crown – had lost to Kent. The trophy will be handed over next week in Manchester, where Surrey’s final game, against Lancashire, now becomes a lap of honour.

This was their eighth win out of 13, and while Hampshire have won nine, they have also suffered three defeats to Surrey’s none. Unlike Surrey, Hampshire have not lost a stream of players to England. 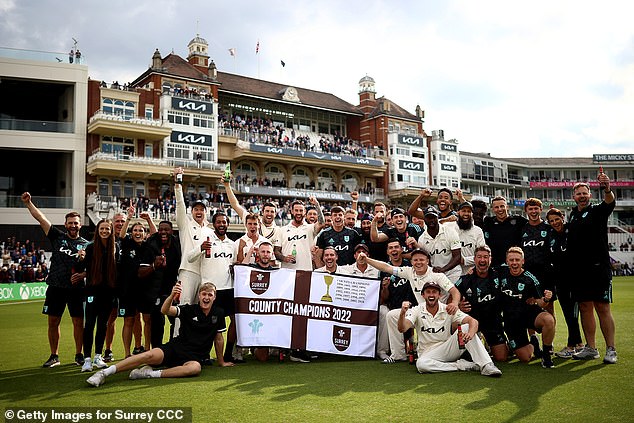 Appropriately, the winning runs were struck by captain Rory Burns, who has put his winter disappointments with England behind him to top-score for the club with 763 runs – one of eight Surrey players to have averaged 40 or more with the bat this season from at least five matches.

Batty described Burns’s ever-presence as ‘gold’, and called seamer Dan Worrall – the Australian who has honed his game on the merciless pitches of Adelaide – ‘probably the best signing that I’ve seen in county cricket ever’.

With a game to go, Worrall has 39 wickets at 24, including four more here as Yorkshire declined from their overnight 89 for two to 208 all out. Burns and Ryan Patel then took just six overs to knock off a target of 55, giving Surrey their first title since 2018, and sparking celebrations at a ground temporarily renamed in honour of Micky Stewart, their 90-year-old former captain.

But on the day Strauss’s review proposed a six-team top tier trimmed by four matches to 10 per side, Batty sounded a note of caution.

‘I think it would diminish the emotion a bit, because it’s built up over so long,’ he said. ‘We’ve got to be careful we don’t lose too many games. Ultimately, county cricket is here to serve an England team. But I just hope we’re doing it for the greater good of the game, and not to keep celebrity cricket alive.’

Burns was equally lukewarm about the prospect of a truncated red-ball season. ‘I personally think it would be too short, and there wouldn’t be enough games to get the integrity of result,’ he said. ‘I agree it needs to be looked at, but 10 is too few.’

Yorkshire, meanwhile, must not slip up next week against bottom-of-the-table Gloucestershire if they are to avoid being dragged into a relegation scrap.