Tabcorp's computer system crashed on the final day of the Melbourne Cup carnival leaving punters unable to bet with the wagering giant.

The TAB system went down at around 11.30am, which caused the Rosehill program to be put back one race, while the problem was being fixed. Races at Wyong have also been indefinitely delayed.

The card at Flemington, featuring two group 1s, was intially unaffected but the meeting was eventually delayed before race five. 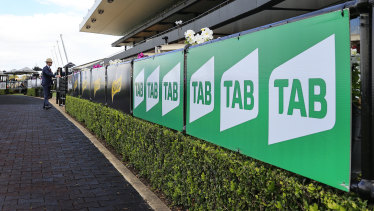 The TAB website went down on Saturday causing delays to racing in Australia. Credit:Getty

The feature event of the day in Melbourne, the 2000m Seppelt Mackinnon Stakes, will now be run at 5.45pm AEST.

"The VRC in liaison with the Racing Victoria stewards has decided to push back race five and all subsequent races by one race due to the current TAB outage," the VRC tweeted.

Victoria's country meeting at Geelong was also pushed back by one race to give the TAB more time to fix the system issue. 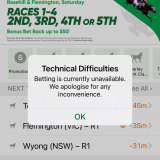 The source of the system outage remains unclear.

"We are still trying to identify the problem and are hoping to be back up quickly," a TAB spokesman said. "There is no evidence or suggestion of our system being hacked."

Punters at Rosehill were still able to bet because the on-course system operates independently of the rest of the TAB system.

The beneficiaries of the TAB problems would be other corporate bookmakers, who were still able to take bets. However, the on-line bookmakers were experiencing some delays in paying winning bets because race results are linked back to the TAB.