Blue Diamond winner Tagaloa is back in business after stamping himself as a genuine Australian Guineas contender with a clinical win in Saturday's CS Hayes Stakes.

The key lead-up event proved a race in two when Caulfield Guineas runner Aysar levelled up to last year's leading Victorian two-year-old at the top of the Flemington straight.

But the Trent Busuttin and Natalie Young-trained colt, wearing Yulong silks for the first time, was too strong under Luke Currie for his Lindsay Park-trained rival. 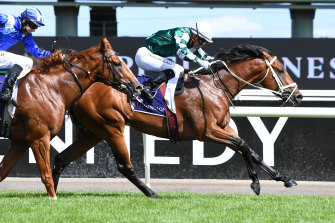 "Tags' is back. Thank God, what a relief," Young said.

"It's fantastic, actually. Dominated that today and he [Currie] gave him a peach of a ride and it worked out perfectly.

"In a couple of weeks time he's going to meet half the same field with two kilos [better] at the set weights so it's really nice going forward that he's keeping his value. He's got that group 3 win as a three-year-old."

Tom Dabernig, co-trainer of Aysar, said he expected his colt to be peaking third-up in the Guineas.

"He keeps running second. He flew out the gates and was probably a little closer than we anticipated," Dabernig said.

“He was a bit keen first-up, which is why we took the blinkers off.

“He presented to win but he's a big, heavy colt and I think he'll be better for the run again.

“Hopefully we’ll have him peaking third-up in the Guineas. But when he ranged up I thought [he was going to win] but he’s looked like that now four runs in a row.”

Leading jockey Jamie Kah gave her an elite steer on the speed and she raced away from her competitors at the top of the straight to win by five lengths.

"I'd say you'd have to start looking at the Australian Guineas," co-trainer Troy Corstens said regarding the Zoustar daughter's next likely target.

"We talked about it and we don't want to put the cart before the horse but we'll have a talk to Jamie and see what she thinks.

"She settled up there and it was a nice speed. She managed to have plenty in the tank and kicked well."

Kah said the filly had furnished into a more well-rounded horse as an autumn three-year-old.

"I was saying to Troy earlier that when I rode this girl in a trial early on I thought she'd be a 1000-metre [horse] and that's it," she said.

"Just the way she went about it she went a bit too quick early and didn't have much left.

"Today she relaxed beautifully and she should have relaxed for another furlong."