Home » Sports News » ‘The love of my life’: Jane Jones opens up on Dean’s death

The devastated wife of former Australian cricketer Dean Jones has spoken of her heartbreak and marvelled out the outpouring of emotion from across the world.

Jane Jones, married for 34 years to one of this country's biggest cricketing names, broke her silence on Saturday, in the wake of her husband's shock death from a suspected heart attack in a Mumbai hotel. 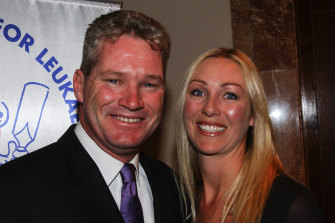 "Given Dean’s special love for the sub-continent, it was especially touching to hear so broadly from India, Pakistan, Sri Lanka and Afghanistan. We are overwhelmed by the scale of the response to the news of his death and we will forever be grateful for that."

Former Australian cricketer Brett Lee had attempted to revive Jones through CPR and a defibrillator and came close twice before an ambulance arrived.

The Australian High Commission in India is assisting the family in having Jones' body returned to Melbourne while Victorian Premier Daniel Andrews has flagged the possibility of a state funeral.

"At this moment, we would sincerely ask the cricketing world to respect the privacy of our family. Details of Dean’s memorial celebration will be released in due course, so everyone has the chance to rightly commemorate his wonderful legacy and bid farewell," Jane said.

Tributes have flowed in from around the world since Jones' death. Cricketers, sports stars including Greg Norman, politicians and musicians including Elton John have all expressed their sorrow.

Cricket Australia is working through a range of options in how to commemorate Jones, with one possibility to have the annual one-day international player of the year named after the former dasher.

The couple's two daughters, Isabella, who also calls herself Augusta, her full name being Isabella Ruby Augusta Jones, and Phoebe had already paid tribute to their father in emotional posts on social media.

"My heart is broken. My Dad. My Hero. The sweetest and most caring person you could ever meet," Isabella wrote on social media.

Phoebe Jones said her father's "legacy will live on in every life he touched" and she also thanked Brett Lee for attempting to revive Jones.

Never afraid to speak his mind, he was even threatened for libel by his then Australian coach Bob Simpson for a column he wrote in The Sunday Age, Jones revolutionised the one-day arena through his aggressive batting, fitness and running between the wickets.

He also had flair off the field, and was the first cricketer to don sunglasses on the field, much to the initial concern of his captain, Allan Border.