The stars are aligning for Will Pucovski, but they're not quite all in a row yet.

Class has never been an issue for Pucovski, and was apparent in all its glory as he made 255 not out for Victoria at Glenelg on the weekend. For a day-and-a-half, the ball fairly pinged from his bat.

For him to play for Australia, his head needs to be clear, he needs to be in form and a place needs to open up, or he has to force one. It's like lining up gun sights. 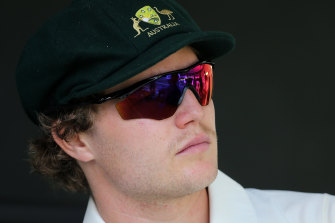 Pucovski recently signed to play in the Big Bash League for the first time, with the Melbourne Stars. Reportedly, he has dealt well with the peculiar rigours of hub life with Victoria in Adelaide. When at last Victoria got to play a match, he volunteered to open the batting against South Australia.

These all may be taken as signs that the mental demons that have dogged him have receded. Hopefully, a series of concussions is also at an end, though the vigil on him must never relax.

Pucovski's form is self-evident. As Greg Chappell notes, he knows not just how to bat, but how to make runs. There is a difference. In 21 widely-spaced first-class matches, he has made two double centuries and a score of 188.

As Chappell, still a hawk-eyed watcher of Australian cricket, also observes, there are a number of batsmen at any one time capable of playing short-form cricket, fewer who can stand up to the strenuous demands of Tests. Pucovski appears to be one. But so does WA's Cameron Green.

Pucovski is 22, Green 21. Chappell is sometimes accused of being obsessed with youth, but says he has only ever been obsessed with talent, whatever its age. Here it is in spades. For Australia, it makes for a rare, happy headache.

Chappell would play them at the first opportunity, saying if you think they might be good enough for Test cricket, there is no point in waiting until some nebulous future day when they are "ready".

But cricket is not footy, where a rising youngster can be slipped in to play limited minutes alongside older hardheads. Test cricket is all deep end. Every position is specialised. Once picked, a man is expected to play his role.

As in so many other spheres, 2020 has blurred the viewfinder. Australia's last day of Test cricket was January 6. It is easy to forget that as things stand, four of Australia's top six are set in stone, the other two at least in lignite. Joe Burns and Matthew Wade are holding their places on merit, as far as anyone can remember, and Wade at least made good enough runs in the Adelaide Sheffield Shield fiesta.

Selector Trevor Hohns knows a change now would not be to repair a weakness and so would have to be convinced that it is fortifying a strength. But he would also be anxious not to let ripe Sheffield Shield fruit rot. It's happened before.

Two years ago, Pucovski was in the Australian squad, earmarked to lead generational change, before his career developed a wobble. In terms of eligibility, his credentials had been accepted. He doesn't have to prove himself again in that sense. Since, Green has emerged in a rush, and has the extra string that he can bowl. It would take the wisdom of Solomon to pick between them. Right now, the trick is find a way to pick either.

Pucovski will know that he has ticked all the boxes except the one that is not his to tick.