The Test summer road train rolled into Sydney on Monday as Cricket Australia chief Nick Hockley expressed confidence it would not be derailed by any Indian misgivings over being confined to their hotel, declaring the the final two matches of the series "all systems go".

The Indian and Australian teams – as well as the match officials and select broadcasting staff – were transported from Sydney airport to their eastern suburbs hotel in four coaches and a mini-van on the penultimate journey of a Border-Gavaskar Trophy circuit that has resembled an obstacle course in the past week. 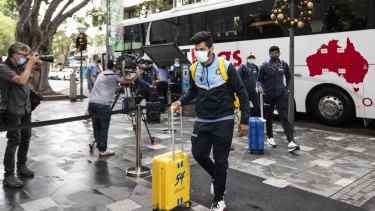 "The players are very clear that in Sydney and Brisbane the protocols are that they will be within our exclusive hotel and then at the grounds for training and playing the matches. Both sets of team management and the players will be working to ensure that those protocols are observed appropriately."

The teams have only short stays in Sydney and Brisbane – they have only two days in NSW before the third Test and three days between the matches – but in reality may spend more time in their dressing-rooms at the SCG over the coming week than anywhere because of rain.

Hockley was confident India would not refuse to play the Gabba Test after the Queensland government said players could mingle in communal areas inside the team hotel rather than being locked in their rooms when not playing or training. Players will have to adhere to the same rules in Sydney, unable to leave the hotel except to travel to the ground but are allowed to mix with teammates inside their accommodation, which has been booked out completely by CA.

The Indian and Australian camps said earlier on Monday that both groups of players and staff had returned negative results for COVID-19 after being tested following a suspected breach of the bubble by five visiting players when they ate inside at a Melbourne restaurant last Friday.

David Warner walks into the team hotel with his family.Credit:Louie Douvis

The BCCI was yet to announce any sanctions against the players – vice-captain Rohit Sharma, Rishabh Pant, Shubman Gill, Navdeep Saini and Prithvi Shaw – but 24 hours after the emergence of a trip to a Sydney baby shop by Virat Kohli in contravention of the rules last month another potential minor breach of the restrictions from earlier in the tour raised its head on Monday.

An Instagram post from late November by Surry Hills restaurant Masala Theory showed Gill, Pant and Saini posing for a photograph with its owner, Yashpal Erda, inside the premises. Erda said the players had been seated outside while they ate, in accordance with the bubble rules. But according to the protocols they should have been wearing masks when they were inside.

The trio dined at the restaurant just after coming out of two weeks' hard quarantine and at a stage when there had been no locally acquired COVID-19 case in NSW for 23 days.

CA has, however, been intent throughout on maintaining the integrity of its bubble and its sliding scale of restrictions, fearing that a player or a staff member could be deemed a close contact in the event of a sudden outbreak and the touring parties' ability to cross interstate borders might be affected.

Hockley said officials and health experts overseeing the guidelines had throughout the summer "made sure the protocols were appropriate for the situation" in order to give players a level of normalcy, enabling them to dine and go for a walk outside, order a coffee and pick up shopping for most of the time.

According to Australia's most capped Test player in the current side, Nathan Lyon, it has been a small price to pay.

"I know there are a few people from both squads that have been in a bubble for close to six months now," said Lyon, who is in sight of taking his 400th Test wicket in Sydney in what will be his 99th Test.

"But in my eyes, it's a very small sacrifice for us to get out there and play the game we love and put a lot of smiles on a lot of people's faces around the world.

"We just have to suck it up and get on with it and get out there and play cricket for our respective countries and make sure we are playing a really competitive brand of cricket."