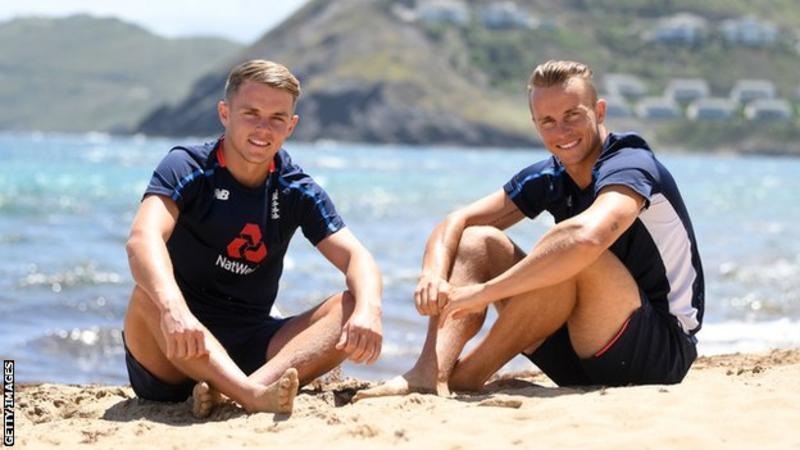 Pace bowler Tom Curran and his all-rounder brother Sam say it would be a “dream” to play in the same England Test team.

The Surrey pair have played three one-day internationals and four Twenty20s together.

“It would be amazing to play Tests with Sam. That’s definitely a huge ambition of ours,” said Tom.

Left-arm seamer Sam is a regular member of England’s Test squads, while the bulk of Tom’s international cricket has been in limited-overs matches – he was part of the squad that won the World Cup last July.

The last brothers to play in the same England Test side were Surrey’s Adam and Ben Hollioake in 1997.

“Any game you play for England is obviously a great privilege, but playing with your brother or a member of your family gives it that extra special feeling.”

Tom’s exposure to Test cricket came during England’s 4-0 series defeat in Australia, since when he has played only six first-class matches because of his white-ball commitments.

“Now it’s trying to get that balance between white- and red-ball cricket and developing my skills and awaiting my chance.”

Tom and Sam are the sons of former Northamptonshire and Zimbabwe all-rounder Kevin Curran. A third brother, batsman Ben, currently plays for Northants.

The postponement of the Indian Premier League, which is set to be extended further after India’s coronavirus lockdown was extended until 3 May, is denying Tom and Sam of the opportunity to compete against each other.

Sam was set to link up with MS Dhoni’s Chennai Super Kings, while Tom was due to play alongside England’s Ben Stokes and Jos Buttler for the Rajasthan Royals.

“There has been some talk about the IPL in terms of scheduling later in the year, but no-one knows,” said Sam. “It might happen this year; it might be cancelled.

“Hopefully I will play against Tom, hit him everywhere and then hit his stumps.”

There will be no cricket in England until at least 28 May and one possibility for its return would be to be play major matches behind closed doors.

“I’m sure every sportsman would love to be playing now, whether it is with fans or not,” said Sam. “I definitely wouldn’t mind playing behind closed because we’ll be playing a game that we love.”

Tom added: “Playing internationals behind closed doors will be a strange thing, but at least there would be some sport on TV for people.

“Once it’s all safe and we’re abiding with government guidelines, whatever decisions are made for us as sportsmen to do, I’m sure everyone will be getting amongst it. I’m very excited to get back out there, whenever that might be.”