India are making a mockery of the doomsday scenarios forecast in the aftermath of their Adelaide surrender as stand-in captain Ajinkya Rahane forced Australia's pace aces to work overtime without a Christmas bonus.

The hosts' run of six consecutive Test wins is under serious jeopardy after a hastily remoulded Indian line-up overcame what shaped as bowler-friendly conditions to make Australia pay for their sloppiness with the bat and in the field. 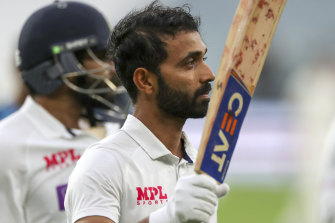 A restrained Ajinkya Rahane celebrates what could prove a crucial century at the MCG.Credit:AP

It certainly has for Rahane, who helped his team to the Border-Gavaskar Trophy deputising for Kohli in 2017. His majestic century was celebrated in a typically understated manner which belied the significance it could have on this unofficial heavyweight championship of Test cricket.

"He absorbed some pressure there and sort of steadied the ship for them when they were still behind our score," Mitchell Starc said. "He batted pretty well there. He's run his luck there and scored a good hundred."

As Justin Langer lamented the lack of partnerships from his batsmen, Rahane was the rock on which India's innings was built, sharing stands of 52, 57 and an unbroken 104 with a makeshift middle order.

The latter, and most valuable, partnership with Ravindra Jadeja threatens to take the game out of Australia's reach. 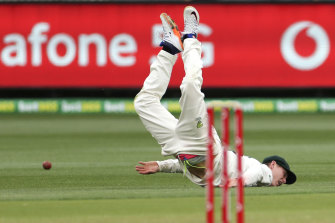 An aggressive batsman, Jadeja has batted with restraint but the game is getting closer to the point where he will have more freedom to open his shoulders.

Former Australian stars Ricky Ponting and Mark Waugh were among those fearing a series whitewash after Kohli's men were destroyed in Adelaide but that dramatic day appears an aberration, albeit an expensive one for India.

Australia may be leading 1-0 but India have taken the honours on four of the five days this series.

India paid a big price for their dropped chances in the first Test, and Australia may do so in this game. The five lives Australia have given India have cost them 75 runs – and the scoreboard is still ticking with Rahane unconquered.

None could be classed as sitters but as a collective painted the picture of a team which may not be mentally at its sharpest, perhaps due to the series scoreline or life on the road in 2020.

Paine's missed one-hander to Shubman Gill, off the bowling of Josh Hazlewood, came during a morning session when Australia's attack could feel as if they were not fairly rewarded for their industry.

"It was not our best day, not our worst," Starc. "We couldn't hang onto those half [chances]. We just didn't capitalise on some of the chances we created to finish in a better position."

Pat Cummins set the agenda in the first session but it was not until towards the end of his eight-over spell, the longest of his Test career, that he broke through, removing Shubman Gill then the prized scalp of Cheteshwar Pujara. The latter was victim of a brilliant, one-gloved snare by Paine.

Rishabh Pant, one of four changes for India which has returned a dividend, changed the course of the day with his dashing strokeplay.

Grassed on 26 by Cameron Green, Pant failed to make Australia pay, his willingness to take the game on seeing him become Starc's 250th Test victim.