Home » Sports News » Will Pucovski scores 193 not out on return

Will Pucovski has made a statement in his bid to force his way back into the Australian set-up, posting a big hundred for Victoria’s second XI outfit against NSW.

Pucovski batted for more than 11 hours in Coffs Harbour, scoring 193 not out from 405 balls faced. 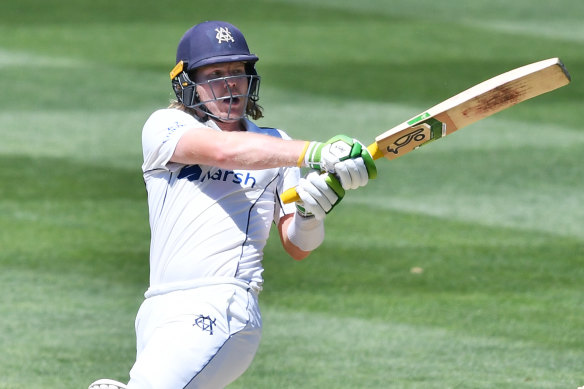 Will Pucovski has struggled with concussion injuries throughout his career.Credit:Getty Images

The 24-year-old, who has been concussed at least 11 times throughout his career, had simply seen enough action when he retired at tea on day three.

He had been hurt earlier in the day when he was hit in the box and required a brief spell to recover as drinks were taken.

Promising talent Ashley Chandrasinghe scored 110 and put on a 268-run stand with Pucovski for the first wicket.

Pucovski is viewed as a generational talent but repeat concussions have derailed his international career.

His one and only Test for Australia was in January 2021.

Pucovski’s most recent concussion came in February, when his return to Sheffield Shield ranks lasted just four days after he copped a soccer ball to the head during a warm-up.

Pucovski was able to return from that setback, but Australia opted against taking him on tour for Test duties or include him in the Australia A tour of Sri Lanka.

However, he was recently part of a group of eight players who took part in a 10-day training camp in Chennai, showing he remains a key part of Australia’s Test plans.