Twenty20’s World Cup is hosted by Australia over the next five weeks, the global tournament for cricket’s richest and fastest growing form.

Those two facts were conjured into reality 15 years ago at the first edition of the event in South Africa, embodied by one unforgettable over in which Yuvraj Singh sent six perfectly respectable balls from Stuart Broad sailing into the Durban night sky.

The tournament’s name back then hinted at the highly unlikely nature of Twenty20’s transformation from a marketing “gimmick” into a truly global, multibillion-dollar affair.

Held in September 2007, the “World Twenty20” was initially given that sort of not-quite-definitive name by the International Cricket Council because for a time it was no sure thing that all invited nations would actually turn up.

India and Pakistan were the most sceptical cricket boards of all. When India’s BCCI did finally consent to sending a team, it was virtually a national second XI, captained by the young M.S. Dhoni and missing Sachin Tendulkar, Sourav Ganguly and V.V.S. Laxman among others.

The first delivery which went into the crowd.Credit:ICC / YouTube

But it was into this rare gap in the cricketing spotlight that others emerged to help take the shortened game into the hearts and wallets of millions: none more so than Yuvraj, then a 26-year-old permanent fixture in India’s white-ball side but not quite fulfilled in the traditional, Test match sense of the word.

In India’s game against England at Kingsmead, he walked out with three overs remaining, having been demoted below Dhoni to preserve a left-right combination.

After a swift start against Andrew Flintoff, the pair exchanged words, locking Yuvraj into an adversarial desire to hit the ball as far as he could.

The second delivery which Yuvraj Singh sent over the boundary.Credit:ICC / YouTube

“Me and Flintoff always had heated arguments on the field because you’re representing your country and trying to beat each other, that’s the nature of the sport,” Yuvraj recalled on the 10th anniversary of his feat. “He bowled two good balls and I was able to hit them for boundaries.

“He obviously didn’t like it and he said something to me and I retaliated. That obviously charged me up and when I came back on the crease I just felt like ‘I want to hit every ball out of the ground’.”

Previous achievers of the feat – Sir Garfield Sobers for Nottinghamshire against Glamorgan’s Malcolm Nash at Swansea in 1968, Ravi Shastri clouting Baroda’s Tilak Raj for Mumbai at Wankhede in 1985, and South Africa’s Herschelle Gibbs smacking Dutchman Daan van Bunge at St Kitts earlier in 2007 – had all done so against spin. But it was not as though pace bowlers had Twenty20 figured out.

Running in at Yuvraj was a 19-year-old Stuart Broad, promising but not the 566 Test-wicket performer he would become. In addition to his callow age, Broad and other quicks lacked the tools of defence that have become standard in Twenty20, trying instead simply to bowl yorkers. Mayhem ensued.

Six balls, all in the 126-130 km/h range, flew off Yuvraj’s bat to the rising excitement of Shastri in commentary. Five were missed yorkers or “slot balls” from over the wicket, the other a wide full toss from around the wicket. None saw changes of pace, bouncers or any great variation.

“I was 19, maybe a little bit naive, lacking a bit of skill at the death, and Yuvi hit the ball beautifully,” Broad said in 2019. “There was still a thought that you can try to bowl six yorkers or six slower balls and batsmen wouldn’t cotton on to what you were doing.

“It was a phenomenal bit of skill from Yuvi, not something I regret or look back on with massive negativity, because actually I think it’s made me the bowler I am today.”

This was the fourth – scored from a full toss.Credit:ICC / YouTube

In addition to Broad’s lack of know-how to stop the run of sixes, Yuvraj had a mindset so clear and focused that he did not, initially, realise he had struck six in a row.

That kind of unaffected thinking, typical in the early days of the format when players did not consider their careers rested on its outcomes, is now a state much more deliberately sought when so much more is at stake.

“It actually didn’t occur to me that I’d hit six sixes, because it was so much aggression,” Yuvraj recalled. “I looked at midwicket at Dimitri Mascarenhas, I gave him a big smile, remembering he’d hit me for five sixes in a one-day game. It was very satisfying.” 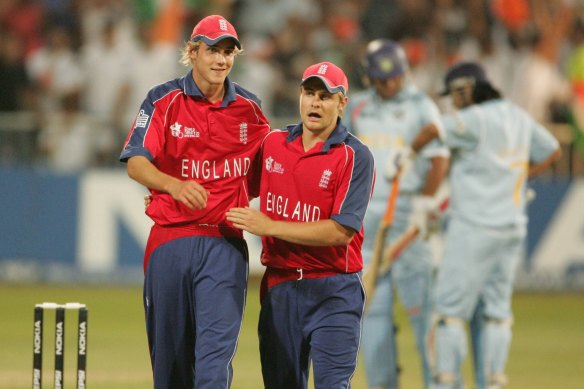 The aftermath: Stuart Broad could only shake his head after being belted for six sixes.Credit:Getty Images

In the space of those six balls, a couple of things became irrevocably true. A player no longer needed to be defined purely by their records in Test matches or 50-over World Cups. And, as stated by Tim Wigmore and Freddie Wilde in Cricket 2.0, the old balance between bat and ball also flipped.

“In Test cricket, the bowlers were charged with attacking – in order to take wickets – while batsmen traditionally emphasised defence,” they wrote. “The framework of T20 cricket inverted this relationship – suddenly batsmen were the offence as they looked to score as many runs as fast as possible and bowlers the defence as they looked to prevent batsmen from doing so.”

As if to underline the point, two more players have done the trick in Twenty20 matches since, albeit against two more unfortunate spin bowlers. Worcestershire’s Ross Whiteley hammered Kyle Carver of Yorkshire for six out of six (excluding a wide) in 2017, and West Indian captain Kieron Pollard rather dampened Akila Dananjaya’s earlier hat-trick for Sri Lanka by doing likewise last year.

Yuvraj would strike again at Kingsmead in the 2007 semi-final against Australia, then the world’s undisputed dominators, carving out 70 from 30 balls to help set a total that India narrowly succeeded in defending. They were to meet Pakistan in the finale. 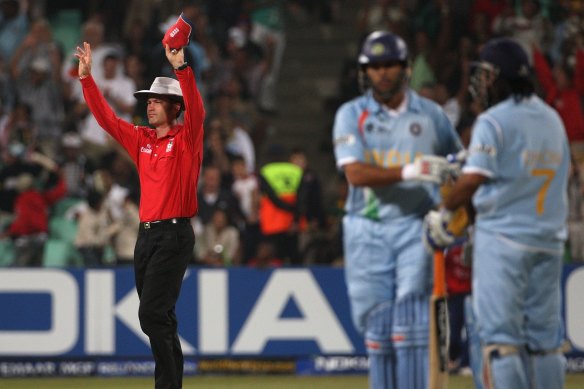 The Australians had seemed on course to chase successfully when Mike Hussey popped a hamstring. As one squad member recalled: “India didn’t treat Twenty20 cricket with much deference in those days, they were sending younger sides and resting their more experienced players. So world cricket changed because Huss blew his hammy out!”

Before the decider in Johannesburg, Yuvraj was approached by Broad’s father, Chris, the match referee, with the wry words, “Thanks for almost finishing my son’s career.” At Chris Broad’s request, Yuvraj signed and handed over his match shirt for Stuart, writing “I know how it feels, coz I have been hit for five”.

A thrilling subsequent victory, sealed when Misbah-ul-Haq scooped Joginder Sharma into the hands of Sreesanth at short fine leg, was capstone on an event that had long since captured India’s public imagination.

The sixth shot added to the heartache for Stuart Broad.Credit:ICC / YouTube

It is true that the Indian Premier League, soon to turn the economics and calendar of world cricket upside down, had already been launched early in the tournament, before Yuvraj’s sixes rained down in Durban, or Dhoni lifted the trophy at the Wanderers.

But the momentum created by these three events together helped to create a wave that cricket is, for good and for ill, still riding.