Tennis luminaries have paid their deepest respects to Australian Bob Brett, coach to some of the best players in the sport, who has died aged 67.

Influential modern-day coach Patrick Mouratoglou, who works with Serena Williams, said Brett "took me under his wings and taught me the job" while 18-time major winner, American Chris Evert, described him as "one of the greatest coaches and people in tennis".

Tennis Australia published a tribute to the Melbourne-born coach, who himself worked with Australian coaching icon Harry Hopman in the 1960s, in the early stages of a decades-long career, after being informed by Brett's family of his passing. He had been battling cancer. 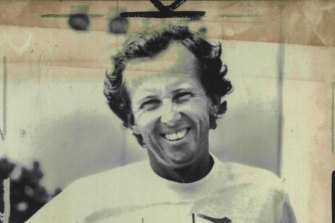 His charges included major champions Boris Becker, Goran Ivanisevic and Marin Cilic. Brett was by Becker's side between 1987 and 1991 when the German won three of his six major titles and became world No.1.

"Bob Brett's passing is a great loss to tennis," said Tennis Australia chief executive Craig Tiley. "He was an exceptional coach and widely admired. Bob guided all level of players to success – from grand slam champions to those starting out in the sport he loved so dearly."

Another famous tennis mentor, Nick Bollettieri, described Brett as "much more than a tennis coach".

"He had a sixth sense about how to reach each player right where they were and make them better players and better people. My deepest condolences to Bob's family," Bollettieri posted on Twitter.

Belgian Kim Clijsters tweeted: "Bob Brett was one of those people who could put a smile on your face without saying a word. Always had great energy ! Thinking of his family today RIP Bob."

In addition to his work with Becker, Ivanisevic, Cilic and other individual players, Brett coached for national tennis associations in Britain, Japan and Canada.

Tributes to Brett continue to pour in from throughout the tennis world via social media.

"Extremely saddened by the passing of Bob Brett, with whom I have collaborated during 6 years and who has taught me so much in my early years as a coach," Mouratoglou posted on Twitter.

Brett is survived by his daughters Caroline and Katarina.

"He is a legend at Hopman's Tennis Academy, where he helped countless players, including Peter McNamara and I, so much, and coached us both on tour for a while," McNamee said. "He's an unsung hero, up there with the great Australian male coaches like Mr. Hopman, Barry Phillips Moore, Tony Roche and Darren Cahill. My thoughts with his daughters and extended family."

Tennis Australia illustrated Brett's approach to his work by citing a comment from the coach.