Carlos Alcaraz faces a huge fight to match Rafael Nadal and Novak Djokovic’s Grand Slam totals, according to coach Juan-Carlos Ferrero. The 19-year-old won the US Open on Sunday night, beating Casper Ruud 6-4, 2-6, 7-6 (7-1), 6-3 to win a first major of his career. And he’s also battled his way to the top of the world rankings, too, making history in the process.

Alcaraz has enjoyed a terrific year, with the Spaniard doing well at Wimbledon and the French Open before claiming a first Grand Slam title of his career on Sunday night.

The teenager was simply too strong for Ruud, outhitting his opponent to become world No 1 under the flashing lights of Flushing Meadows.

Alcaraz will now be able to dictate his own future. With one Grand Slam under his belt already, at such a young age, it’s unlikely to be the last triumph of his career.

Ferrero has now suggested his young gem has the potential to secure more titles in the future.

But the retired tennis star also warned him that matching Nadal and Djokovic, who have won 22 and 21 Grand Slam crowns in their respective careers, won’t be easy.

“I have the goal to put him on the high level of tennis,” he said. 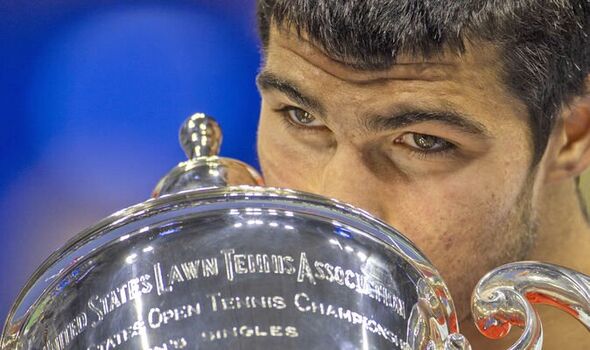 “Of course, I think it’s going to be very, very difficult to achieve what they [Nadal, Djokovic and Roger Federer] have done on tennis.

“We’re talking about 22 Grand Slams. He has only one. Is a long way still to go.

“But who knows? I think he has all the tennis and potential to be one of the best. All we have to do is try it.”

Ferrero also opened up on how Alcaraz has been moulded into a superstar, suggesting his compatriot needed to bulk up during his younger years.

“When he arrived to academy when he was 15, he was like a spaghetti, very thin,” he said. 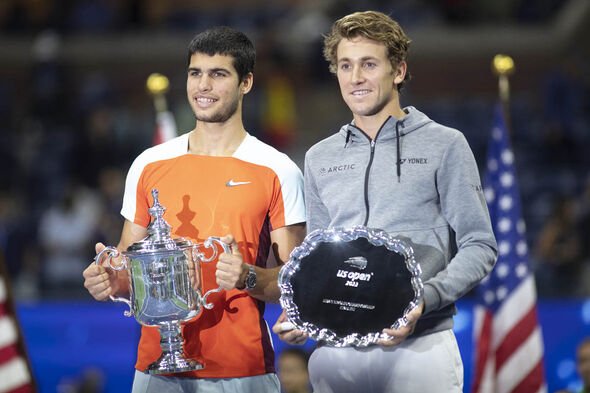 “We had to work. Obviously we saw that he had very fast hands, very fast legs, but no muscles at all, not in the back, not in the legs.

“We had to work a lot. But obviously we saw something very special on him.”

When asked about the victory over Ruud specifically, he added: “The other matches was past.

“Of course, all the hours that he get on the court, obviously it matters to play the final.

“As he said, there is no time to be tired at finals. It’s one of the things that we were talking before the match. 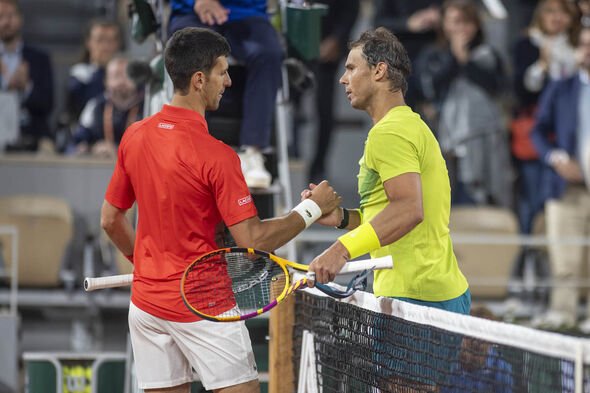 Alcaraz himself, meanwhile, labelled his victory as ‘crazy’.

“It’s crazy for me. I never thought I was going to achieve something like this at 19 years old,” he said.

And the youngster also reacted after receiving a special message from Nadal, who was delighted at seeing his compatriot reign supreme.

“Of course, I’m hungry for more. I want to be at the top for many, many weeks. I hope many years.

“I’m going to work hard again after this week, these amazing two weeks. I’m going to fight to have more of this.”

Ruud was respectful in defeat, insisting his opponent’s career was ‘going in the right direction’.

“It’s incredibly impressive what he has achieved already as a teenager. It’s sometimes hard to believe he’s only teenager,” the Norwegian said.

“He’s one of these few rare talents that comes up every now and then in sports. That’s what it seems like.

“Let’s see how his career develops, but it’s going all in the right direction.”