Nick Kyrgios saved his best comment for rival Novak Djokovic with a chuckle when speaking under his breath. 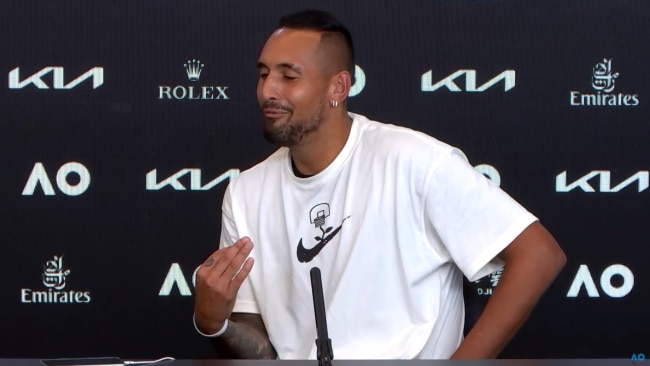 Ash Barty kicks off her campaign on a blockbuster Day 2 of the Australian Open at Melbourne Park.

Australia has a host of stars in first-round action, but the early talk of the town was still focused on Nick Kyrgios and his Monday night exhibition on Tuesday morning.

You can follow all the live scores and updates below.

Canadian Denis Shapovalov has given a brutally frank response after being denied a toilet break during his four-hour marathon on Monday night.

Shapovalov said he was worried about having to relieve himself on the court after the chair umpire ordered him back onto the court.

The tense moment came after Shapovalov had conceded the fourth set with the match on a knife-edge.

After winning the match in five-sets, Shapovalov insisted his bathroom emergency was genuine and nowhere near an attempt at gamesmanship to stop opponent Jannik Sinner's momentum.

"I was just blowing off steam, just kind of cooling my head, getting rid of it," he said.
"But also, I do think it's a dumb rule. Especially for me, I've got the smallest bladder ever, so I literally got to take a p*** every set. So it's difficult, especially when you're on that court for so long.
"Before the match I'm trying to hydrate as much as possible, so yeah, I gotta pee, man."

Nick Kyrgios saved his best comment to rival Novak Djokovic for a mumble under his breath as he took another shot at the World No. 1 on Monday night.

Kyrgios cruised through to the second round of the event, but his press conference was all about his running war of words with the Serbian star.

Kyrgios last month labelled Djokovic a "tool" for his public comments on the conditions players endured during their 14 days of hard lockdown in hotel quarantine.

Djokovic responded Sunday, saying he does not respect Kyrgios off the court.

Kyrgios' reply when asked about Djokovic's latest comment has been widely reported, but his quip at the end of his lengthy response was the best comment of all.

After finishing his take down of Djokovic, Kyrgios prepared to address the next question before congratulating himself about the stinging reply he'd just delivered.

"That was a f***ing good answer, bro. Bang. Nailed him," Kyrgios said with a grin as he made Lleyton Hewitt's iconic "come-on" pose and also showed off a content "OK" hand signal.

His full answer explains why he was so happy, when asked if he would like to say anything about Djokovic's statement.

"It’s a strange one for me because, I read his comments, he said he doesn’t respect me off the court," Kyrgios said.

"It would actually make complete sense to me if he was like, ‘I don’t like respect the guy on the court’. I could understand if he doesn’t agree with some of my antics on the court in the past.

"And when we’ve played matches, I actually think I’ve been pretty good towards him. I’m not quite sure how you can’t respect me off the court.

"I think I’ve gone about things extremely well, especially after the pandemic. I was driving around delivering food to people who couldn’t get their supplies. I was extremely careful about what I was doing, not spreading the virus to anyone. Now I’m actually trying to donate meals to people who need food. I have my foundation. So it’s very strange to me that he would say he doesn’t respect me off the court.

"I actually do a lot off the court. Yeah, he’s a very strange cat, Novak is. A heck of a tennis player but unfortunately someone who’s partying with his shirt off during a global pandemic, I don’t know if I can take any slack from that man. That’s as bad as it gets for me.”
Djokovic was told about Kyrgios&amp;#x27; comments after beating Jeremy Chardy in straight sets, but chose not to respond. "Great," is all he said.

Join the conversation, you are commenting as Logout