The Australian Open won’t adopt the ATP’s new toilet break rules, which have been designed to stop players using the bathroom as a tactical ploy.

The ATP has responded to the Stefanos Tsitsipas-Andy Murray toilet break feud at last year’s US Open by implementing a new set of guidelines for use of the facilities from next year. 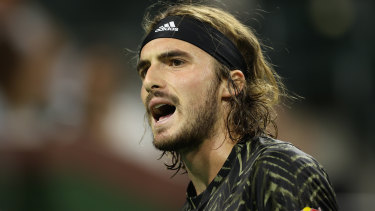 Players will only be allowed one bathroom break per match, and it can only be taken at the end of a set.

The clock will start once the player reaches the bathroom, and time violations will be used as punishment if any player breaches the allotted time limit.

Players will also be permitted two minutes per match to change clothes.

But the Australian Open – which is governed by the ITF, not the ATP or WTA – told the Herald the new rules have not yet been adopted for the first grand slam of 2022.

Grand slam rules state that players are permitted to take two toilet breaks in best of five set matches, for a “reasonable” amount of time.

Those rules have allowed players to use bathroom breaks as an avenue to stopping momentum for their opponent for years, but the issue came to a head when Tsitsipas and Murray clashed in New York City.

Murray claimed Tsitsipas was “cheating” during the final set, and doubled down on those claims post match.

“It’s just disappointing because I feel it influenced the outcome of the match,” Murray said. “I’m not saying I necessarily win that match, for sure, but it had influence on what was happening after those breaks.”

Nick Kyrgios also weighed in on the matter, when the chair umpire in charge of his first round match insisted he walk to his towel placed in either corner of the court.

At the time, Tsitsipas claimed he did nothing wrong according to ATP rules.

There was similar controversy at the Australian Open, when Ash Barty was beaten by Karolina Muchova.

Barty appeared to be cruising to a comfortable win when Muchova took a medical timeout and left the court.

The Czech won five of the next six games, forced a third set and won the match.

The WTA has not yet indicated whether it will take the same stance, nor have the other grand slam tournaments.