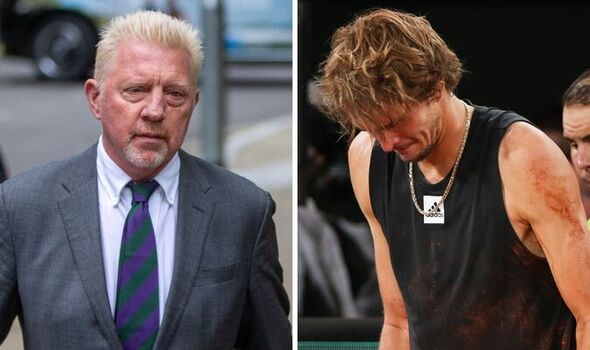 Alexander Zverev’s brother, Mischa Zverev, has revealed that Boris Becker sent the world No 3 a private message from prison in the UK following the German’s injury against Rafael Nadal at the French Open. The crowd inside Court Philippe-Chatrier were stunned to silence when Zverev rolled his ankle and collapsed to the floor in agony.

Zverev screamed and cried in pain before needing a wheelchair to exit the court. After being assessed by physios back in the medical room, Zverev returned to the court on crutches where he officially withdrew from the semi-final.

The 25-year-old received an outpouring of support after the match with Novak Djokovic among those sending their well wishes. “Get well soon Sascha,” Djokovic wrote in his Instagram story.

“Boris said he followed what was happening in the tournament and wishes Sascha all the best and a quick and good recovery.”

Becker was jailed for two-and-a-half years for concealing £2.5million of assets to avoid paying money he owed after filing for bankruptcy. He’s expected to serve just half of that sentence and reports last month claimed the German tennis icon had been transferred from Wandsworth to Huntercombe prison.

Becker has long been linked with coaching Zverev with the two compatriots knowing each other for many years. The six-time Grand Slam champion also enjoyed great success during his three years as Djokovic’s coach between 2013 and 2016.

Zverev flew back from Paris at the weekend and shared an update on social media with a picture of him wearing a protective boot over his right foot. “Hey guys! I am now on my way back home,” he said.

“Based on the first medical checks, it looks like I have torn several lateral ligaments in my right foot. I will be flying to Germany on Monday to make further examinations and to determine the best and quickest way for me to recover.”

Zverev was included on the entry list for Wimbledon, but his ankle injury raises serious questions on whether he will be able to compete.