‘Nobody wants to talk about it when we lose’: Dan Evans has no regrets over going public with Davis Cup selection criticism and has not yet cleared the air with captain Leon Smith… as he says Novak Djokovic is the man to beat in 2023

The refreshingly unvarnished pronouncements of Dan Evans have rarely sat easily with the tennis bourgeoisie, and that continues to be the case.

Three months on from Britain’s failure to make the finals of the Davis Cup finals, and his subsequent comments about errors in selection, and he has still not cleared the air with Captain Leon Smith.

A veteran of 21 ties, world number 27 Evans is still unsure on whether he will make himself available for February’s qualifying round away to Colombia. 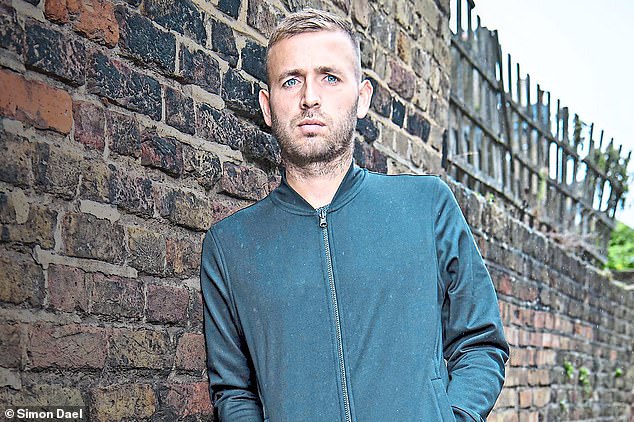 He is back in Scotland this week, playing for England in the Battle of the Brits match against Scotland taking place in Aberdeen.

The edge that accompanies any such fixture may be added to by his criticism of Smith picking Andy Murray and Joe Salisbury for the doubles in Glasgow’s Davis Cup group stages that took place, post US Open. Twice the duo lost in deciding rubbers, consigning GB to elimination.

Evans, who brings a combination of bluntness and droll Brummie humour to his conversation, does not regret going public with his comments amid the bitter disappointment. 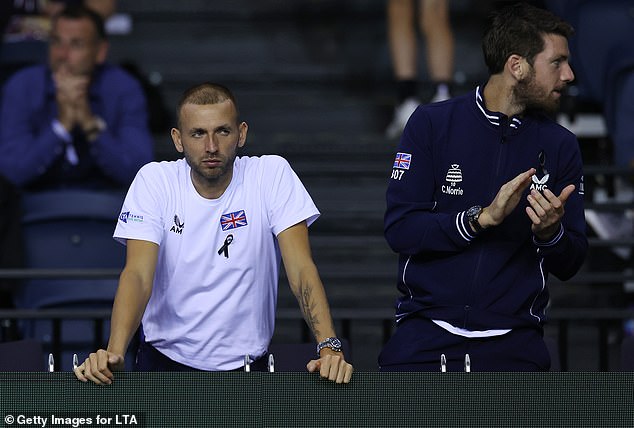 ‘Nobody wants to talk about it when we lose’: Evans thinks it was fair to criticise Leon Smith

‘We are good at discussing things when we win but nobody wants to talk about it when we lose,’ he says. ‘The normal LTA (Lawn Tennis Association) response is we will take it on board and review it.

‘I just didn’t think it played out as it should, to the best of our possibilities, and some of that is on the captain. I think it’s only fair the captain gets some criticism.

‘I don’t think I did anything too wrong, Leon is big enough and old enough to take it. He gets paid well enough, don’t worry about that. He messaged me but I made it clear that I wanted to have a conversation, and that hasn’t happened yet.

‘Tennis is business and you can disagree like you do in any area of normal life, I don’t think it’s that big a deal. I’m not against Leon and don’t want to fall out with him, he has done very well as Davis Cup Captain, I just made it clear I thought he had got it wrong.

‘Everyone tried as hard as they could and I don’t dislike Joe Salisbury because of it or anything. My biggest issue was that they (doubles specialists Salisbury and Neal Skupski) had just come off a trans-Atlantic flight, and had two days practice when others had been there from the Monday.’

Evans is not the only British player thinking about whether they want to turn out against Colombia, who will elect to play on clay in a country which is a 30-hour journey away from Australia. 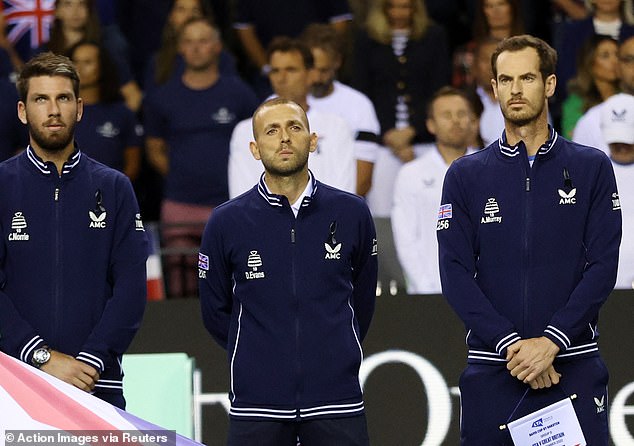 At the Battle of the Brits, Evans (M) will be featuring for England up against Andy Murray (R)

‘It’s an awkward draw and an awkward tie. We will see what happens in Australia and how I feel, see how Leon feels. It has made it more difficult with me speaking up about it, although I thought that was fair. I’m not demanding that I play doubles. I’m hoping to play but if Australia doesn’t go well then I might have to go and play on the circuit at the expense of the Davis Cup.’

This week’s match will be an odd mix of highly competitive tennis and a slight showbiz element with football personalities Ian Holloway and Ally McCoist as the respective captains.

Holloway and Evans, both of whom have maverick tendencies and have never met, will be a particularly interesting combination. Informed that they share an interest in horse racing, the tennis player replies: ‘Well at least we’ll have something to talk about during the changeovers then.’

Those playing have an eye on the Australian Open and will be hotfooting it from the frozen north of Scotland to the contrasting Antipodean summer as soon as it concludes on Thursday night. 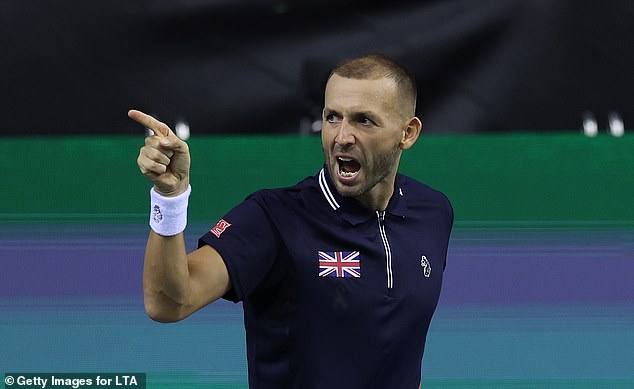 ‘I guess there will be some edge there’: Evans is looking forward to the BOTB against Scotland

‘If I’m honest it isn’t that great timing with the United Cup beginning on December 29 (the new team event in Sydney) but I felt it only right that we support it,’ says Evans, who feels he owes one to the BOTB’s inventor, participant and promoter, Jamie Murray.

‘Jamie and his team have done a great job with these events he has put on. They really looked after us when he put on the Battle of the Brits during the lockdown and it was really valuable for those who played it. It was a really bad time for everyone that year (2020) but he created something with a good atmosphere and it got very competitive.

‘It will be some good preparation and I guess there will be some edge there and competitiveness. I’d imagine the crowd will be very much for Scotland.’

While his sometimes outspoken views can be abrasive Evans, 32, has a high tennis IQ. His experienced eye tells him that his team-mate this week, Jack Draper – soon to turn 21 – has a very bright future.

‘I would say he will definitely finish in the top 20 this season and I can see him going higher from there. He seems pretty level-headed and although it’s his second full year on tour I don’t see too many issues for him.

‘He has got a very big game. I was there in Montreal (where he reached the quarter finals of the Canadian Open) and he made it look like he was playing a Futures event.’ 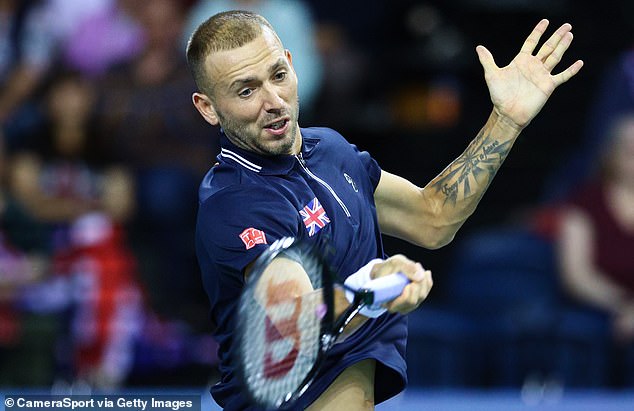 Evans will travel to Scotland after a recent break from the tennis treadmill that saw him visit his partner Aleah’s family in Kuwait and go racing in his adopted hometown of Cheltenham. He has also been glued to the World Cup, sometimes in the company of his coach and support team, who are all Argentinians.

‘I work with three of them, and I can’t take any more of hearing about Messi, so I’m definitely rooting for France in the final.’

A chance meeting with Novak Djokovic in the gym while training in Spain this month reminded Dan Evans that the 35 year-old Serbian remains the man to beat this coming season.

The two of them, along with former Wimbledon women’s champion Garbine Muguruza, were at the Puente Romano club in Marbella escaping the worst of the northern winter.

‘Novak was around and I saw him in the gym a bit and had a couple of chats with him. When you look at him in the gym, he looks like a gymnast – the way he stretches it’s like watching a 14 year-old. So if his body doesn’t break down he has to be in a great position. 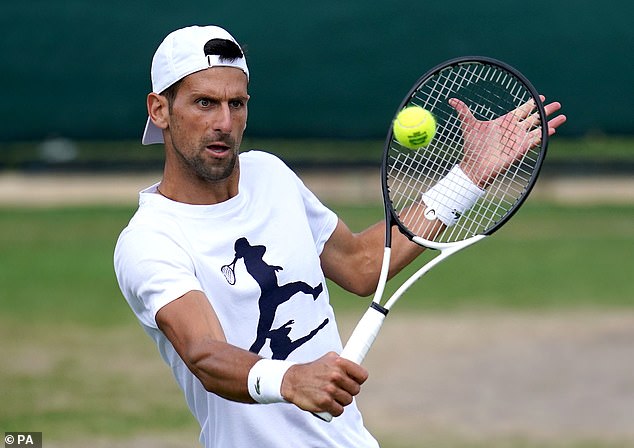 ‘He had just got confirmation that he can go to Australia and he is pretty pumped about it. When you look at how he finished the year, and his ranking with how little he played compared to others, he is definitely the favourite for Australia and Nadal is probably second favourite.

‘I reckon Novak still believes he is the best by miles and his game looks as sure as ever.

‘Novak and Rafa are in their mid-thirties but sport is changing. You look at Messi in recent weeks and someone like Olivier Giroud. Then you look at someone like Andy (Murray) and what he is doing with a metal hip. 35 really isn’t such a big thing these days.’