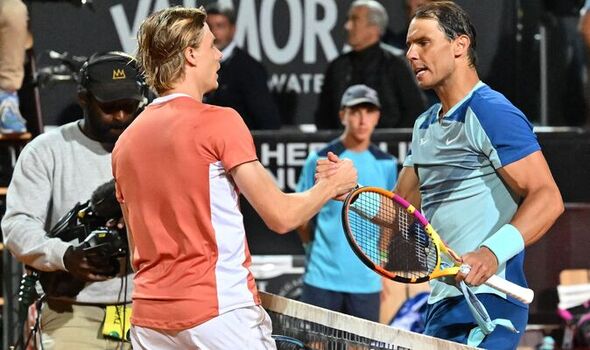 Denis Shapovalov wished Rafael Nadal well for the upcoming French Open after defeating the Spaniard 1-6 7-5 6-2 in the third-round of the Italian Open. The 10-time champion in Rome appeared to be struggling with an injury in the final set and the world No 16 said he wanted to see the 13-time French Open champion recover in time for the clay-court Grand Slam.

Shapovalov completed a three-set comeback in two hours and 37 minutes to get his second win over Nadal. The Canadian raised his level following a one-sided first set but the defending champion was struggling in the final set as he coule be seen limping and wincing, and the world No 16 admitted he was hoping to see the Spaniard fully fit in time for the upcoming French Open.

“I mean it’s obvious to see that something was going on, especially towards the end of the match,” he said of the assumption that his opponent was physically hampered in the final set. “I’m sure he was trying to do a good job during the match not to show it but hopefully he’s okay, I know he’s been struggling with the rib a little bit. Hopefully he’s alright for French Open.”

Confessing that he wanted to see the 13-time French Open champion recover as a fan, he continued: “Obviously I’m a huge fan of his, growing up I watched him play him so many times, growing up I wanted to play and behave like him so definitely super look up to him and hopefully he’s fit for the French.”

JUST IN: Alcaraz lists what he’d steal from Djokovic, Nadal and Federer