The Czech women’s player deported from Australia amid the Novak Djokovic visa saga says she will chase compensation from Tennis Australia.

Doubles specialist Renata Voracova, 38, was sent packing from Australia after her visa was cancelled by border officials because of her COVID-19 vaccination status. 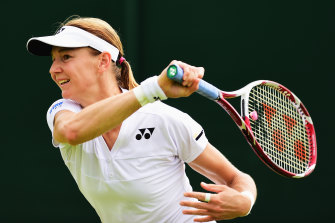 Voracova was granted entry into Australia under the same provisions for a medical exemption from COVID-19 vaccination given to world No.1 Djokovic.

The world No.82 doubles player has spoken of her frustration at seeing Djokovic win his court battle to avoid deportation.

“I feel good for him, that he won [in] the court,” Voracova said on BBC Radio 5 Live.

“[But] I feel a little bit frustrated for me, that the lawyers and my advisers who were there with me didn’t apply for court too, but I also understand because Novak hired his lawyers so he had to also pay for this. I think this was the main issue why I couldn’t go [to] court and apply for the same.”

Voracova had already played in a warm-up tournament in Melbourne and had spent several days in the country before being questioned by Australian Border Force officials.

Voracova said she had “10 minutes to defend myself” during a “really tough” ordeal with limited legal counsel.

The Women’s Tennis Association (WTA) will provide its strong support to Voracova, pledging to “work with all authorities on addressing this unfortunate situation”.

“The air ticket alone cost 60,000 Czech crowns (€2460, $2780) and my coach travelled with me. And then there is all that time, hotels, training for the grand slam, the potential prizemoney.

“I hope Tennis Australia will face up to it and that we won’t have to take legal steps.

“I’m not thinking about tennis. I’m still waking up from the shock, I haven’t processed it yet. I’m exhausted.”

Tennis Australia was contacted for comment about Voracova’s situation.

The WTA said it would help find the right outcome for Voracova who “suddenly had her visa cancelled when she had done nothing wrong”.

The tour veteran had been kept in the same hotel as Djokovic before flying out of Melbourne last Saturday. She has said she was questioned for six hours by officials.

“They just came to my hotel,” Voracova said. “First they told me when they came to my room that they [wanted] just some explanation about my exemption, that it would take around an hour.”

But she was then told her exemption was not a valid reason to enter Australia. The ABF later confirmed that she “voluntarily departed Australia following ABF inquiries”.

Like Djokovic, Voracova was granted a medical exemption – after a multi-step review process set up Tennis Australia and the Victorian government – to compete in Australia after recovering from the disease late last year.

The WTA, like the men’s ATP, is continuing to encourage its members to be vaccinated.

“The complications experienced over the past few days where athletes have followed the approved and authorised process of receiving a medical exemption for entry into the country are unfortunate,” the WTA said in a statement.

“Renata Voracova followed these rules and procedures, was cleared for entry upon her arrival, competed in an event and then suddenly had her visa cancelled when she had done nothing wrong.

“We will continue to work with all authorities on addressing this unfortunate situation in an appropriate manner.”