Australian Open champion Novak Djokovic has once again defended the legitimacy of his injury status, claiming his abdominal strain has in fact grown in size and he now requires rest before returning to tennis.

Djokovic told reporters earlier in the tournament that he had a “definite tear” in his abdominal region and was unsure if he could play against big serving Canadian Milos Raonic in the fourth round.

He beat Raonic in four sets before coming from behind to beat sixth seed Alexander Zverev, also in four sets. 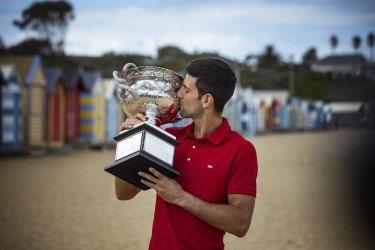 Djokovic, shortly after disposing of Russia’s Daniil Medvedev in straight sets to become a nine-time winner at Melbourne Park, told Nine, the owner of this masthead, that he was “persona non grata” in Australia.

When reporters at Brighton Beach on Monday questioned him about the severity of his injury, Djokovic said he had come from another MRI scan in the morning.

“It’s bigger than what it was when it happened when I did the first MRI after the third round,” the Serbian said.

“It’s not too bad, judging by what the doctors said, but I will have to take some time off to heal.

Djokovic said that people always have and will continue to doubt him.

“They will always question anything I say or anything I do and that’s fine, I just accept the fact that I can’t please everyone,” he said.

“Does it frustrate me? Of course it does. I have feelings like anybody else. I don’t enjoy when someone judges or criticises me. At the same time, I accept the fact that everyone is entitled to their opinion.”

Former Australian Open tournament boss Paul McNamee told The Age he was “ashamed” of the way in which Djokovic has been treated by the ATP recently.

Djokovic has had an awkward year in the tennis limelight, which culminated here in Australia when he sent a list of demands to tournament officials for his time in hotel quarantine.

He has now played in nine Australian Open finals and is yet to lose one.