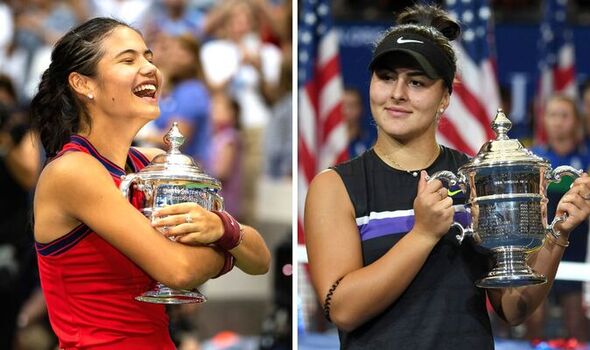 Emma Raducanu and Bianca Andreescu have given their verdict on the similarities they share ahead of their first meeting at the Italian Open. Both players were born in Canada, have Romanian heritage and won the US Open as teenagers on their tournament debut.

Raducanu has been handed a tough draw in her debut at the Rome WTA 1000, facing a fellow US Open champion in Andreescu with the winner to meet either Sara Sorribes Tormo or former world No 1 Naomi Osaka. It will be a first meeting between Raducanu and Andreescu, with many quick to point out the similarities between the first-round opponents.

And it seems the parallels haven’t gone unnoticed by the teenage Grand Slam champions themselves, as it was the Canadian herself who pointed out that the Brit was both in Ontario like she was. “I’ve thought about the parallels, but I don’t go crazy. It’s just a really weird coincidence,” the former world No 4 said ahead of their match.

Both Raducanu and Andreescu won their US Open titles on their respective debuts in Flushing Meadows as teenagers, with the Canadian just 19 when she beat Serena Williams to lift the trophy in 2019 and the Brit still 18-years-old when she became the first qualifier to win a Grand Slam last year.

They also watched each other’s runs to the title in New York with interest, as Raducanu admitted she could “learn” from the 21-year-old. “Yeah, I watched that tournament,” the tenth seed in Rome said.

“I thought Bianca was playing incredibly well. I think her physicality is one of her strengths, how good she is moving, how low she stays. I think that’s really cool. And probably something I can learn from myself.”

Andreescu was also a big fan of Raducanu’s when she watched the Bromley local’s final against her compatrior Leylah Annie Fernandez, and admitted she had been waiting for her own chance to face the world No 11. “I watched her win the US Open, and I was really happy for her because I won it basically around her age,” she said.

“Obviously she was playing a Canadian, so that was really nice too. She’s a really great player, so I’m expecting a really good match. I remember saying, I want to play her – and it looks like I got my wish.”