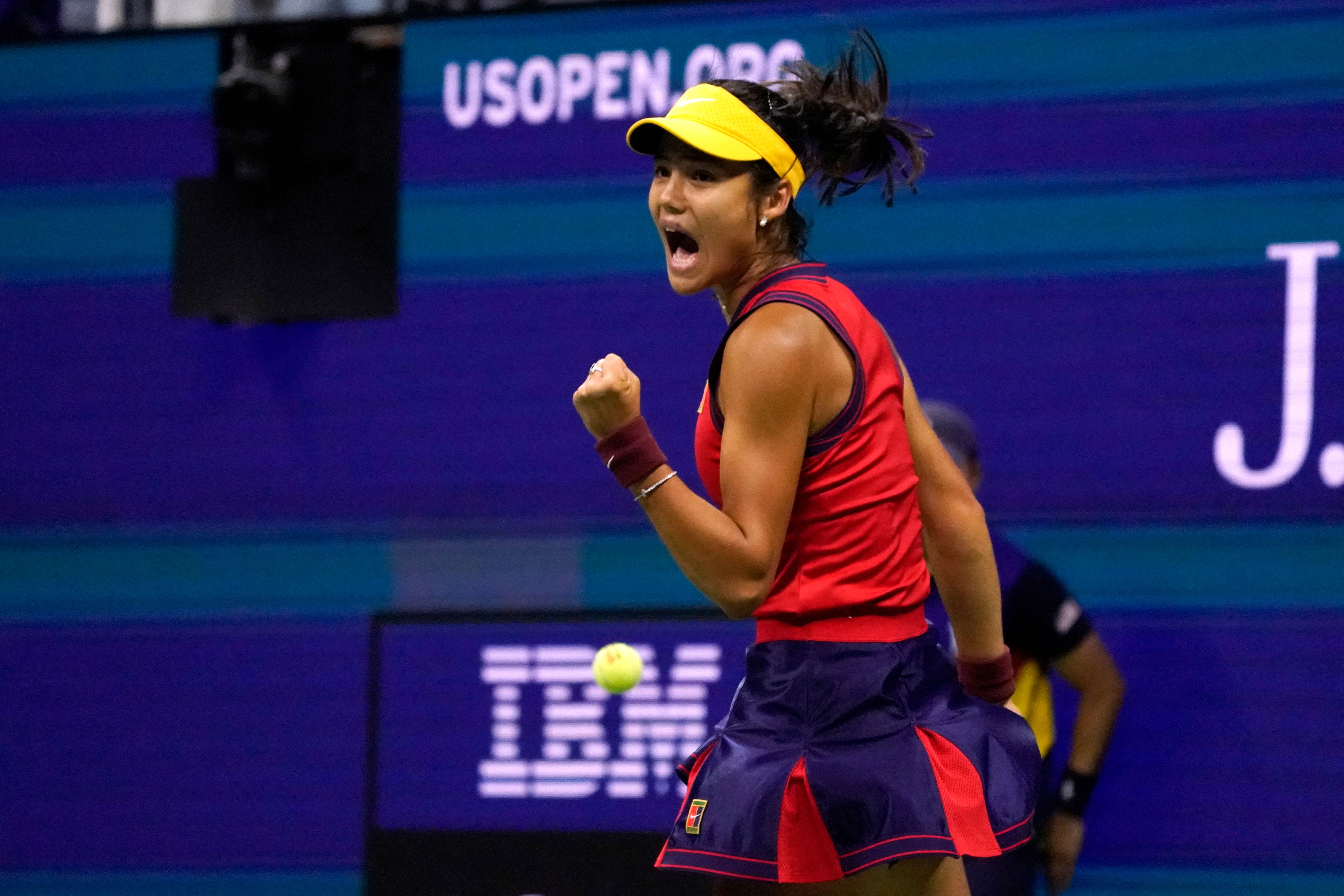 Emma Raducanu has made tennis history by becoming the first ever qualifier to reach the final of a Grand Slam after seeing off Maria Sakkari at the US Open.

The British sensation recorded a dominating 6-1, 6-4 win to book her spot in Saturday’s final against Canada’s Leylah Fernandez.

After playing her ninth match of the tournament, including three qualifiers, the talented 18-year-old became the first British woman to reach a Grand Slam final in 44 years.

This is only Raducanu’s second Grand Slam appearance following her run to the last-16 at Wimbledon earlier this year, but her meteoric rise up the world rankings will now see her become the new British No.1 on Monday.

Much like her quarter-final win over Belinda Bencic, Raducanu looked nervy on her first serve, having to fend off three break points before eventually holding serve as Sakkari put a forehand long.

Much of the talk in the lead up had been about Sakkari’s first serve – she won 92% of points on her first serve against fourth seed Karolina Pliskova in the quarter-finals.

But Raducanu’s first experience of the Greek’s power proved to be no problem as a double-fault and missed drop shot from Sakkari helped her to an early break of serve.

Sakkari, remarkably looked more nervous than the 18-year-old as she again failed to capitalise on another four break points before her opponent fought back to race into a 3-0 lead.

The dream start for Raducanu and a moment of reflection for Sakkari as she retreated to the changing room to change her skirt, seemingly suggesting it was too tight to the umpire.

A stunning volley from Raducanu at 30-40 in the fourth showed Sakkari she was not just here to make up the numbers and she duly followed that up with a sublime backhand winner down the line, before the Greek double faulted on her opponent’s second break point.

Everything was going the teenager’s way, and she barely gave Sakkari an inch, racing to 5-0 with even a poor drop shot making its way over the net to claim her fifth game in a row.

It took Sakkari until the sixth game to deliver her best shot of the match, a huge crosscourt forehand at 15-15, and after double faulting, she finally had her first points on the board.

A 17-shot rally at the start of the seventh then saw Raducanu on her way to holding serve and go on to take a fully deserved one-set lead in just 36 minutes – her 17th consecutive set since the start of her US Open journey.

A reaction was needed from the No.17 seed, and she did just that, holding to love, sealed with a convincing ace down the middle of the court.

Dominating from the back of the court, showing patience and control way beyond her years, Raducanu was soon a set and a break up against the 26-year-old.

Another drilled crosscourt winner past Sakkari took her to 40-30 before an ace left her three games away from a remarkable final appearance.

Sakkari let out a roar of emotion to hold in the fifth game of the second but Raducanu proved reluctant to break from her stride by holding her serve to love to go 4-2 up.

Raducanu was toying with her opponent as she found herself on triple break point. Sakkari saved all three expertly, the last being one of the most physically demanding points of the match.

The pendulum continued to swing as Sakkari saved further break points to finally hold at a crucial game in the match.

An unforced error pushed Raducanu to the brink of victory as Sakkari was forced to hold serve to stay in the contest, and she did.

But Raducanu, who revealed earlier this week she’d had to rearrange her flights after originally planning to head home before the main draw even got underway, held her nerve and her serve to complete her tennis masterclass.

Raducanu will now face Fernandez, who only turned 19 on Monday, to become the US Open champion, after she defeated world No.2 Aryna Sabalenka 7-6 (3) 6-4 4-6.

Victory over Fernandez would see Raducanu become the first British woman to win a Grand Slam singles title since Virginia Wade in 1977.