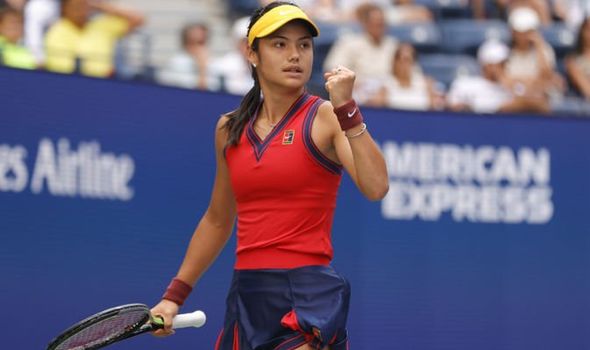 Emma Raducanu claims she was nervous during the opening stages of her US Open fourth-round tie with Shelby Rogers. Raducanu struggled with the pressure when she reached the same stage at Wimbledon in her breakthrough tournament earlier this summer.

The 18-year-old was off her usual pace as she lost the opening two games of the match against Rogers.

But Raducanu quickly regained her composure and won the following six games to take the first set.

She then continued that momentum to win the first five games of the second set before serving for the match after Rogers got on the board.

During her post-match interview on Arthur Ashe Stadium, Raducanu said: “It feels absolutely amazing to play in front of all of you.

“Shelby is a great opponent and has done so well here in the US Open. She has had a great week so I knew it was going to be a tough match.

“I am so happy to come through and overcome some of the nerves in the beginning.”