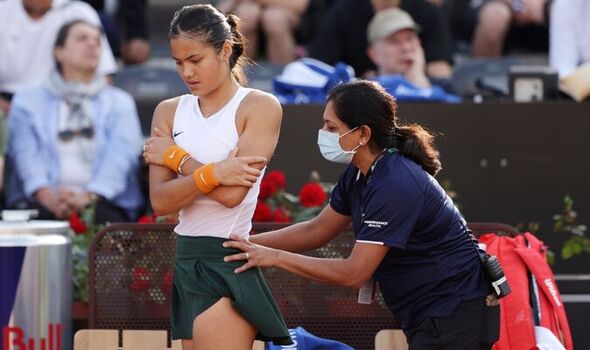 Emma Raducanu retired a set and a break down to Bianca Andreescu in the opening round of the Italian Open as she continued to suffer with the back injury that has troubled her in Madrid and Stuttgart. It meant the 21-year-old advanced to the second round 6-2 2-1 RET after 65 minutes.

It was the first meeting between Raducanu and Andreescu, with many quick to notice the similarities shared by the two. Both won the US Open title as teenagers making their debut in Flushing Meadows, both were making their debuts in Rome, both were born in Ontario, Canada and both have Romanian heritage, causing Andreescu to brand it a “really weird coincidence”.

It was a tight opening game for the pair on the Grand Stand Arena. Raducanu immediately went 15-40 down but was able to save the two break points, then getting dragged into a lengthy, five-deuce game, forced to save another break point before holding after eight minutes.

Andreescu, who is now down to world No 90 after spending the better part of two years sidelined with a knee injury, won seven points in a row to hold to love and go 0-40 up on the 10th seed’s serve. Raducanu managed to save the break points and get back to deuce for a second successive game but this time back-to-back errors gifted the Canadian the break.

The 21-year-old continued her run of games, holding for 4-1 and breaking Raducanu again to put herself within a game of the set. The 19-year-old managed to end Andreescu’s streak and held for 2-5 before calling the physio and taking an off-court medical time out for the back issue that has plagued her in recent tournaments.

Upon her return, the Canadian managed to serve out the set to love after as physios continued to linger outside the court for Raducanu. The world No 11 managed to hold on in the opening game of the second set, smiling as she switched sides on the court. Raducanu was broken from 40-30 up when she called the trainer to court and could be heard saying “I can’t move” before retiring to the former world No 4 after an hour and five minutes.

It means Andreescu advances to face Nuria Parrizas-Diaz in the second round, while Raducanu’s next tournament will be her French Open debut. The world No 11 had struggled with the same back injury during her three-set loss to Anhelina Kalinina in Madrid last week, admitting she felt like she had a “5 per cent” chance of winning that match.

Coming into Rome, Raducanu said she was “managing” the back injury but it appeare to worsen against Andreescu. “I think it’s just coming from a lot of intensity and overload. My back, I’m managing it. Like it’s fine. But it’s just trying to adapt again to the long matches, to the intensity. I think that all of the small sorts of niggles I’m getting, they’re all related and connected to each other when something is overcompensating, perhaps. Yeah, we’ll see,” she said ahead of the tournament.