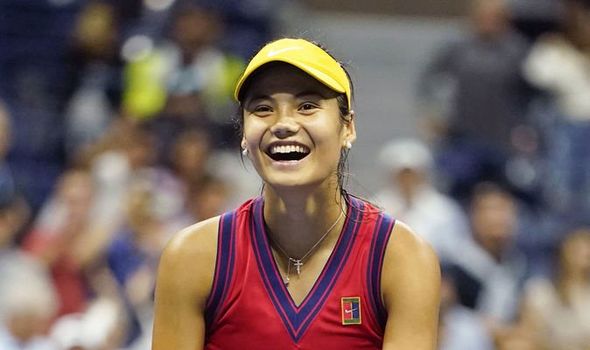 The 18-year-old joked she had become a victim of her own success, saying: “Can I say, I can’t get a tennis court either, I still can’t get a court!”

But the teenager, from Bromley, Kent, also told ITV’s Good Morning Britain that she is proud of inspiring more youngsters to pick up a racquet.

And she told BBC Breakfast about her phone chat with Prime Minister Boris Johnson. Emma said: “He congratulated me and we also spoke about inspiring more kids in grassroots tennis.

“Hopefully my win can show you can live a normal life and achieve great things.”

But not everyone has their name trademarked. The family lawyer Anthony Brierley has applied to safeguard the names “Emma Raducanu”, “Emma” and “Raducanu”. But the youngster insists she is not thinking about her £1.8million prize money after becoming the first British woman to win a Grand Slam event for 44 years and the first qualifier to ever achieve the feat.

She celebrated by posing with a billboard showing the moment of her stunning triumph in New York.

Emma said her parents Ian and Renee – City of London traders – will look after her financial affairs. She said: “I don’t really think about the money side, just love competing.

“I know tennis is an extremely expensive sport so it will probably go towards that. There are lots of taxes and expenses. I haven’t logged on to my bank, I’ve just been at home or been in the moment.”

Describing being reunited with her parents in their quiet cul-de-sac on Thursday, the new golden girl of tennis revealed it was a pretty low-key affair.

She said: “They just gave me a hug. My mum made some really good homemade dumplings. Just reassurance in saying they’re proud of me.”

The prodigy’s down-to-earth background should stand her good stead. If she enjoys consistent success her earnings are predicted to surpass those of Japanese tennis star Naomi Osaka and US legend Serena Williams – the world’s two highest-paid female athletes – become a billion dollar star.

She is managed by Max Eisenbud, vice-president of tennis at entertainment giant IMG, and one of sport’s most powerful agents. And a multi-cultural background, being half-Chinese and fluent in Mandarin, bolsters her appeal.