Home » Tennis » Federer, Nadal and Djokovic warned of new future GOAT who could break all records 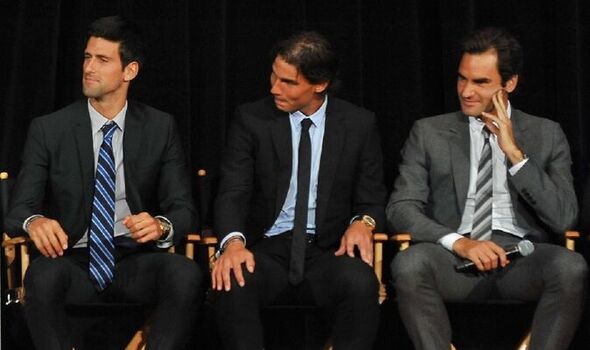 Roger Federer, Rafael Nadal and Novak Djokovic have been warned that their GOAT status is under threat from Carlos Alcaraz. Renowned tennis coach Rick Macci, who spotted the likes of Serena and Venus Williams when they were teenagers and saw them transform into Grand Slam champions, claimed the 19-year-old was the best player he had seen in 40 years.

Alcaraz managed to defeat Nadal for the first time in his career on Friday to advance to the semi-finals of the Madrid Open exactly one year and one day after their first meeting when he was the 120th-ranked wildcard making his Masters debut and won just three games against Nadal on what was his 18th birthday. 366 days later, as the world No 9 and a Masters champion already in Miami, he defeated his idol in a victory that caught the attention of Rick Macci.

The legendary coach discovered and coached five future world No 1s in the Williams sisters, Jennifer Capriati, Andy Roddick and Maria Sharapova and was even a key character in the Oscar-award winning movie King Richard. And he has now claimed that Alcaraz will exceed the Big Three of Federer, Djokovic and Nadal as the best talent he had seen in decades.

“I have seen Federer, Nadal and Djokovic when they were little, but in the last 30 years I have not seen anyone like Carlos Alcaraz,” the seven-time United States Professional Tennis Association coach of the year said. “I can see this boy becoming the greatest player of all time.”

Macci had already been impressed by the four-time title winner in his third-round match against Cam Norrie, claiming Alcaraz had all the qualities of four greats rolled into one. “Saw last 2 sets of ALCARAZ/NORRIE. I said he was the JOKER /FED/RAFA wrapped in one! I was wrong. I FORGOT AGASSI ALSO!!!!” the American exclaimed in a Tweet.

“KID IS THE BEST I HAVE SEEN IN LAST 40 YEARS! SPECIAL LIFETIME TALENT!” And the youngest-ever USPTA Hall of Fame inductee went one step further, tipping the teenager to achieve a massive milestone by the end of the season and hit the top spot of the rankings.

Evaluating his game, Macci also wrote: “Crazy make up speed/cat like reflexes/razor sharp vison/hands like cotton/liquid power/bullet proof mentally/surgical creativity/ and the tennis court his stage to perform magic tricks! CARLOS ALCARAZ number one by end of the year!”

Alcaraz will first face the challenge of the current world No 1 Novak Djokovic, in what is their first-ever meeting in the Madrid semi-finals. The 19-year-old is already up to world No 6 in the live rankings off the back of his victory over Nadal and is second in the race of 2022 points alone, so an ascent to world No 1 by the end of the season is well within the realm of possibility.