Home » Tennis » Heartbreak for Raducanu as she limps out of Wimbledon

BREAKING NEWS: Heartbreak for Emma Raducanu as she limps out of Wimbledon in the second round after being beaten inside an hour and a half by French world No 55 Caroline Garcia on Centre Court

Emma Raducanu’s Wimbledon return proved to be an anti-climax as the US Open champion exited in the second round with defeat by Caroline Garcia.

Living up to the hype has proved impossible for the 19-year-old so far and, a year after rocketing to stardom with a run to the fourth round and then achieving the unthinkable in New York, she slipped to a meek 6-3 6-3 loss on Centre Court.

Short of matches after three weeks out with a side strain, Raducanu was simply unable to find the level required to match Frenchwoman Garcia across the 86-minute contest. 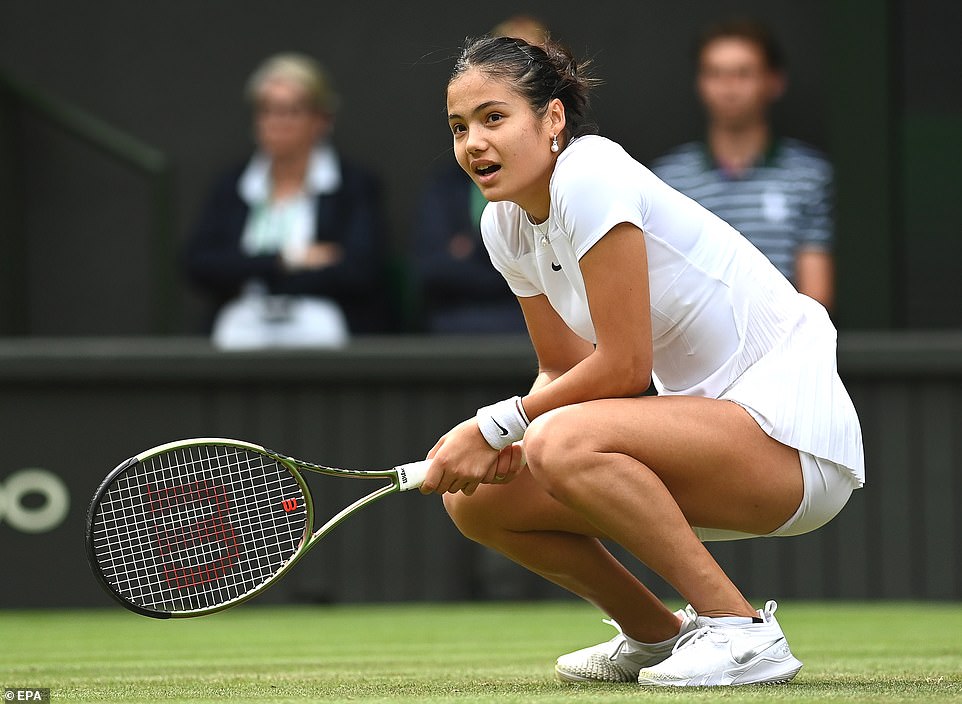 The British No.1 suffered a straight set defeat – losing 6-3, 6-4 on Centre Court to the French player 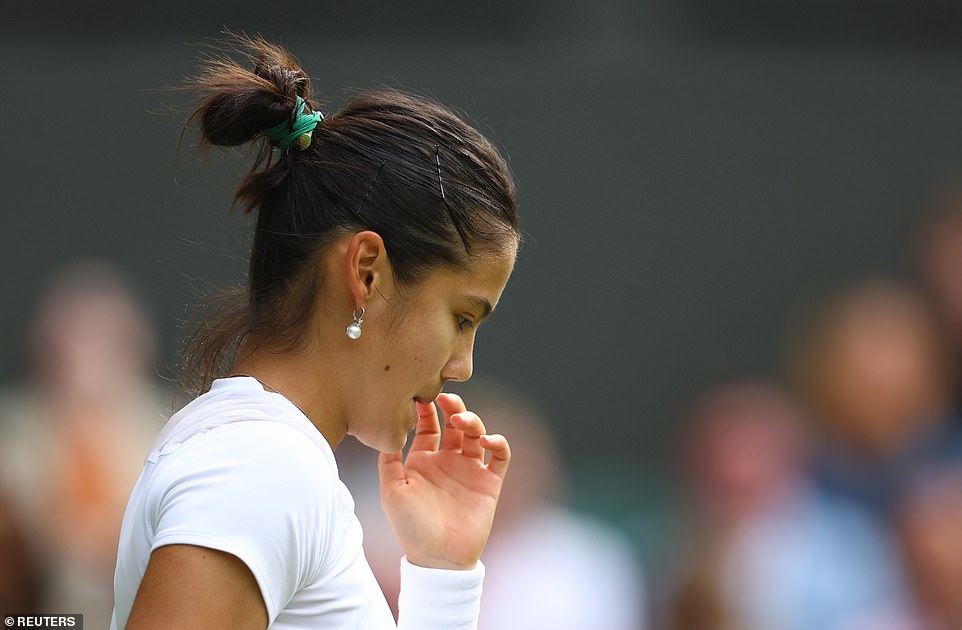 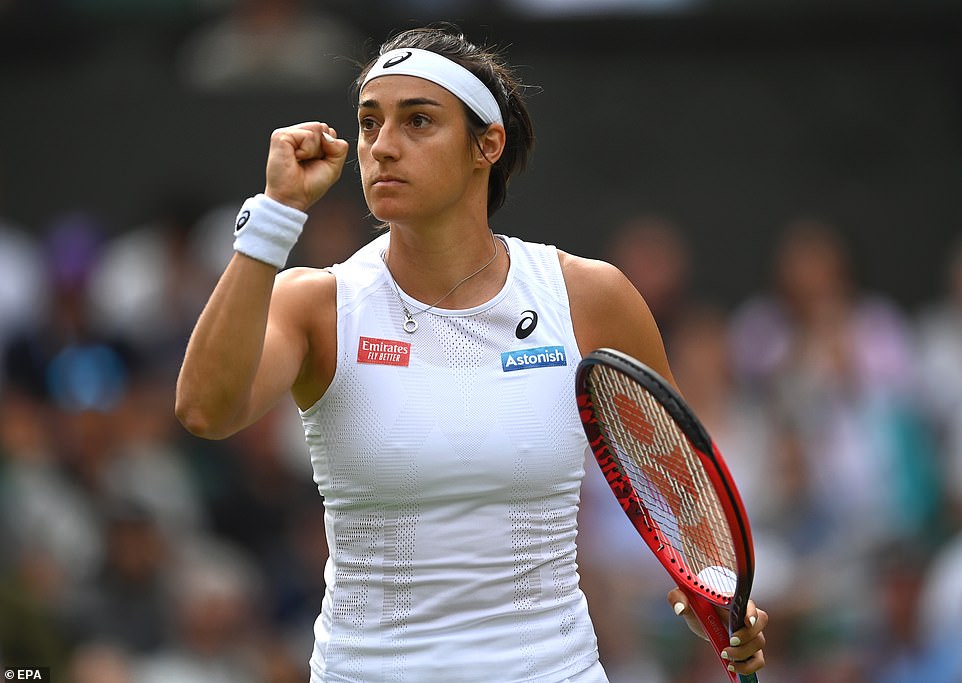 Raducanu’s mantra this tournament has very much been that, whatever she achieved last year, she remains a relative novice with everything to gain simply from experiencing these environments.

She was quick to dismiss the idea that her main emotion after a first Centre Court victory on Monday against Alison Van Uytvanck should be relief.

But expectations for a grand slam champion are inescapable and hopes for her second-round match were boosted by Raducanu having won her only previous clash against Garcia in Indian Wells in March.

The Frenchwoman is ranked down at 55 but, having been tipped as a future world number one by Andy Murray as a teenager, has been as high as number four. 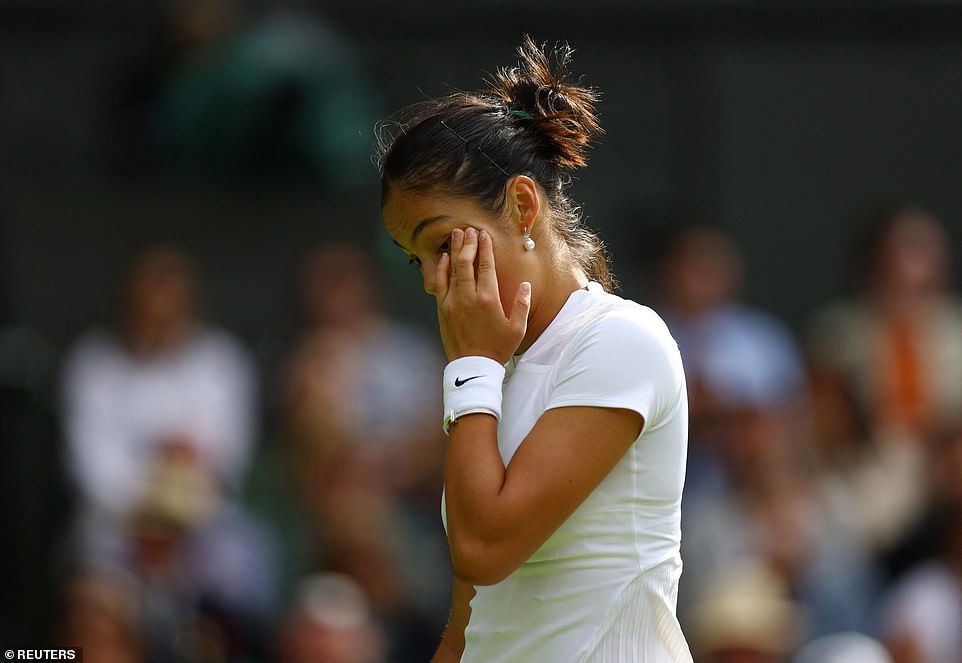 Expectations were high for the Brit, with Raducanu winning her only previous clash against Garcia in Indian Wells in March 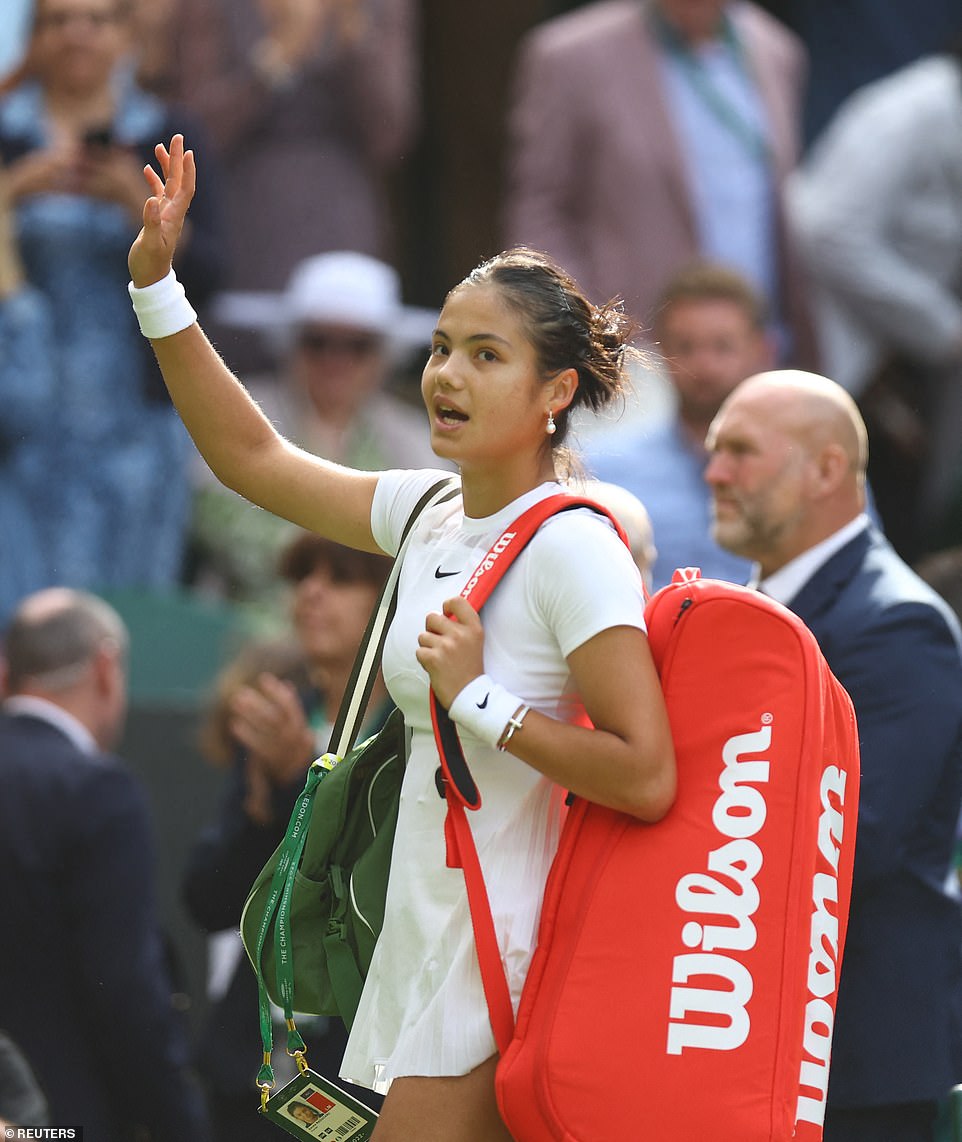 The reigning U.S Open champion has not won successive matches at a Grand Slam since her triumph in America last year 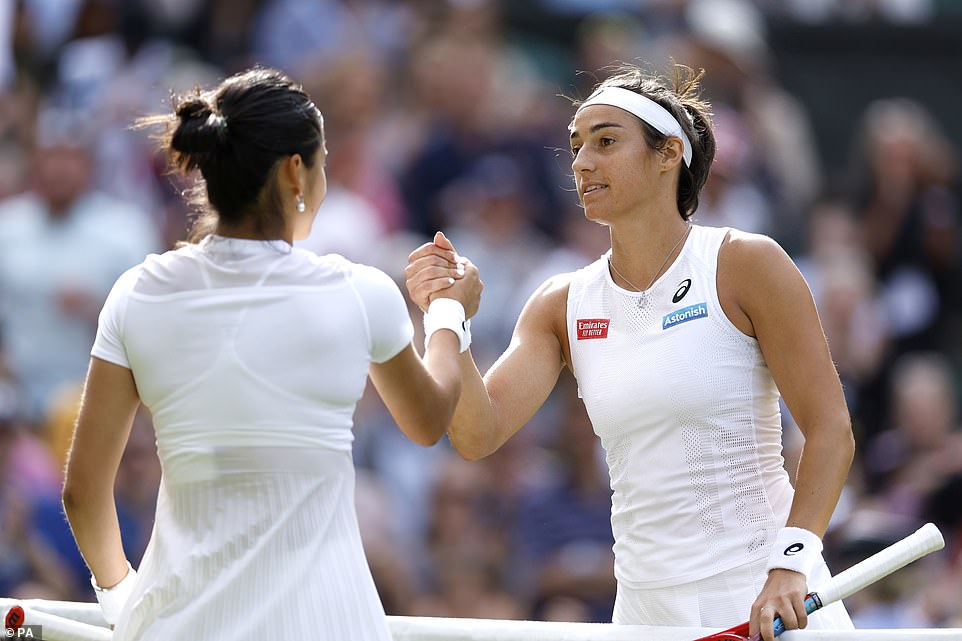 Garcia, the former No.4 ranked player in the world, held strong to see of Raducanu in the 86-minute contest

She struggled in the first round against Britain’s Yuriko Miyazaki but had arrived late from Germany, where she won a tournament on grass at the weekend.

Garcia had promised to be aggressive and she was as good as her word, stepping into the court on Raducanu’s second serve in particular and looking to take control with her backhand.

With blustery conditions causing problems for both players, Raducanu battled back from losing the opening two games, but was outhit by Garcia as the 28-year-old reeled off three games in a row.

A clever second serve from Raducanu saved a set point at 2-5 but Garcia, who can be a wobbly closer, made no mistake on her own delivery. 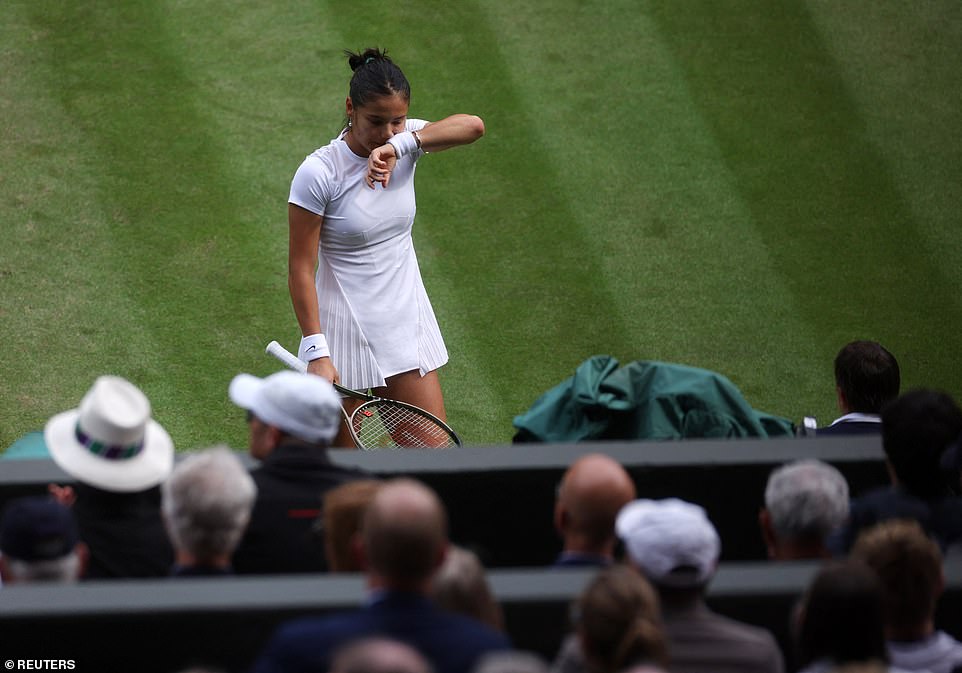 Both women left the court for a bathroom break as the stadium, which had been a long way short of capacity, belatedly filled up.

Raducanu held serve twice to start the second set but was in trouble as soon as Garcia got into any rally, the Frenchwoman’s weight of shot simply superior to that of her much younger opponent.

The crowd tried to inspire Raducanu and cheered heartily when she immediately retrieved a break to level at 3-3 only for a double fault and backhand shanked into the tramlines to put Garcia ahead again, from where she pulled away to clinch victory.

Disappointment must be tempered by the knowledge Raducanu has many more chances to challenge for the latter stages at Wimbledon in the future, and her thoughts will now turn to the build-up to the defence of her title in New York later in the summer. 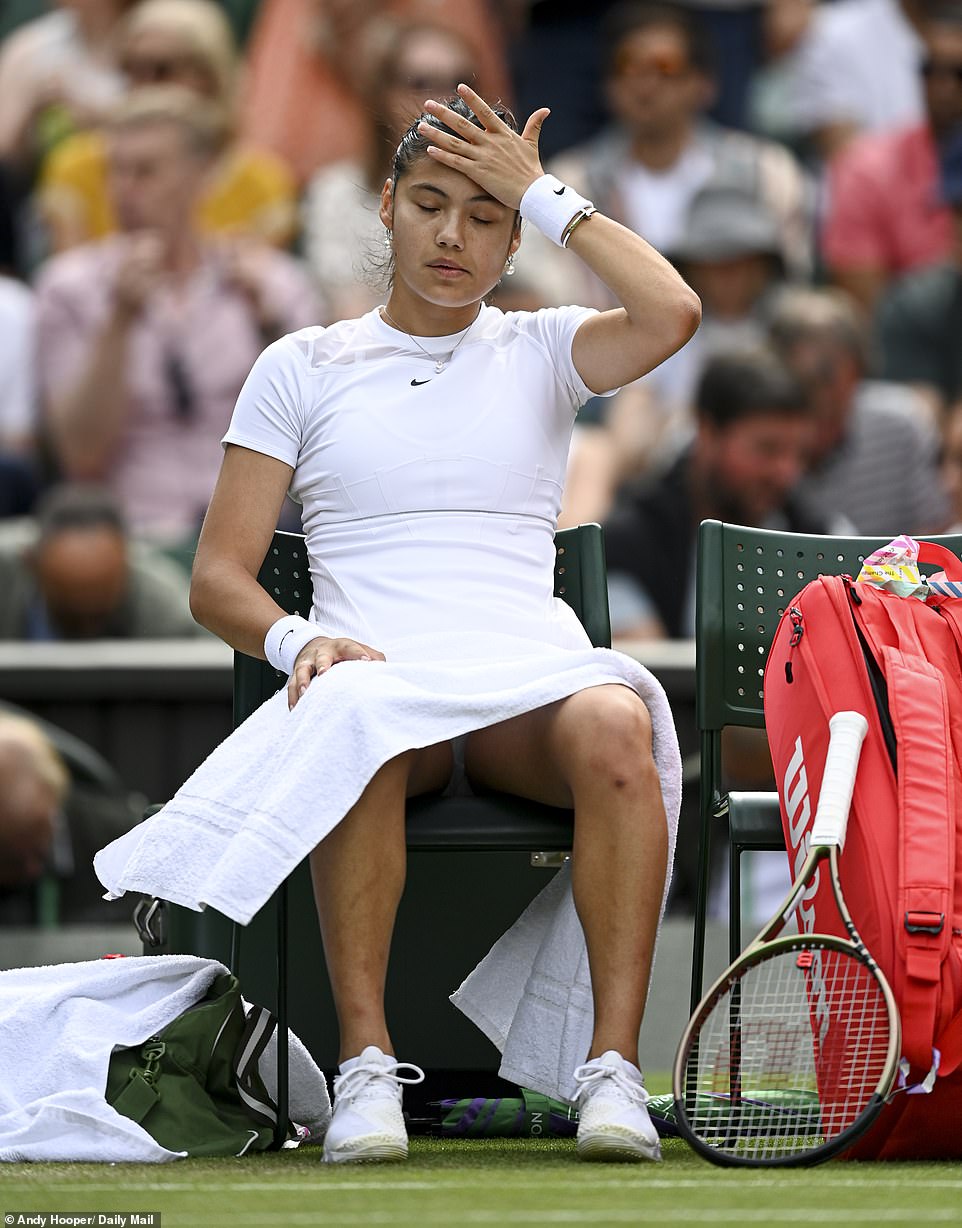