Home » Tennis » ‘I realised it was going to have to be me’: Osaka on her powerful US Open protest

Sitting in a hotel room in New York last August, nursing a hamstring injury that would eventually see her withdraw from the final of the tournament, Naomi Osaka watched on as America erupted in reaction to the police shooting of Jacob Blake.

In protest the Milwaukee Bucks, led by MVP Giannis Antetokounmpo, refused to leave the locker room of the Disneyworld function centre doubling as the NBA bubble for their first round play-off game against the Orlando Magic. 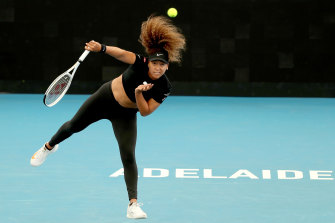 Osaka, inspired by the actions of the NBA players, wanted to start a conversation in a “majority white sport”, as she called it, withdrawing from her semi-final the next morning to force the postponement of the Cincinnati tournament.

“Honestly it was just so instinctive,” Osaka told the Herald on the eve of this year’s Australian Open. “I remember watching the news unfold from the NBA while I was playing ‘Cincy’. I just kept thinking that ‘surely tennis is going to take a stand’. I quickly realised that it was going to have to be me.”

By the time the US Open rolled around a week later, the Japanese-born daughter of a Haitian father and Japanese mother went from tennis prodigy to poster girl of the Black Lives Matter movement, not just in the United States but around the globe.

Unknown to most at the time, Osaka walked into Flushing Meadows on day one of the US Open with seven different face masks in her bag, each embroidered with the name of an African-American recently killed by a police officer. 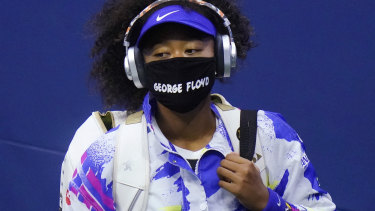 Osaka wears a mask featuring the name George Floyd at the US Open.Credit:AP

Breonna Taylor – the 26-year-old who was shot and killed in her Louisville home while she was sleeping, was the first name in a gesture that captured the attention of people around the world.

Motivated by a desire to wear all seven masks, Osaka pressed ahead all the way through to the final, when she walked on to Arthur Ashe stadium with the name of 12-year-old boy, Tamir Rice, who was shot dead in Cleveland while holding a toy gun at a playground back in 2014.

“I’m most proud of getting conversations started where they might not otherwise have been,” Osaka said. “For example there were BLM marches in places like Japan, that I’m not sure was imaginable a few months ago.”

With a different name plastered across her face each time she took the court, Osaka’s own name began dominating headlines around the world. 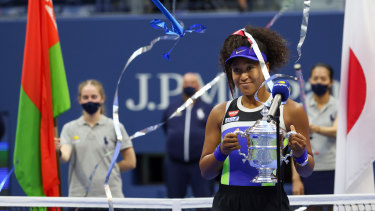 Naomi Osaka celebrates a comeback victory after winning the US Open on Saturday.Credit:

“The feedback from her sponsors was overwhelmingly positive and supportive,” Osaka’s agent Stuart Duguid told the Herald.

“Some of the brands built entire campaigns around her in the aftermath – for example Beats and Levi’s. In terms of individuals, I’m in pretty regular contact with Billie Jean King, who is a huge supporter of Naomi. I thought it was interesting how she related to the level of pressure that Naomi took upon herself – in taking a bold stance, you have to back it up with a win.”

Osaka did just that, claiming her third grand slam with a victory over Victoria Azarenka in the final of a tournament that will come to be remembered as much for her powerful protest as her success with racquet in hand.

“The events of last summer definitely raised her profile, especially in the US," Duguid said.

“From a marketing perspective, of course that made her even more desirable. However, it didn’t really change the core strategy of brands we wanted to align with. There have probably been two landmark moments in her career – the first was after she beat Serena to win the US Open in 2018. The second was after the events of last summer. After a few years working together I think I know her pretty well – so none of her plans were a surprise to me.

One of Joe Biden’s highest priority goals upon taking the US presidency from Donald Trump was to advance ‘racial equity’. It provided hope to many American athletes who believed their actions during the Black Lives Matter movement wouldn’t be in vain.

“I really hope so and I’m optimistic,” Osaka said when asked if she believed the new leadership in America would bring positive change.

“Kamala (US vice president Kamala Harris) is such an inspiration to me as a woman with Caribbean and Asian roots – much like myself.

"I feel like representation is so powerful and for young girls to see people in leadership positions like Kamala and Michelle Obama is so inspiring." 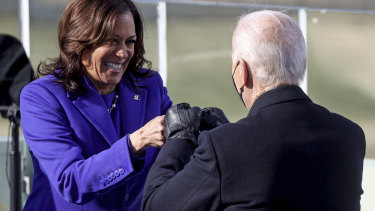 US Vice President Kamala Harris bumps fists with President Joe Biden after she was sworn in during the inauguration in January.Credit:AP

At the end of 2020, Osaka’s feats both on and off the court were recognised alongside NBA superstar LeBron James, who is the executive producer on her Netflix documentary to be released later this year.

Osaka and James were named the AP female and male athletes of the year respectively, summing up the magnitude of what the 23-year-old was able to do in a breakout 2020 campaign.

"It was a great honour," Osaka said. "It meant even more to be alongside LeBron because he’s had such an amazing season both on and off the court."

While her popularity has soared across the globe over the past 12 months, Osaka’s third most prominent market is now Australia, with the US replacing Asia at number one.

“I’d say that until last year Asia was the most prominent market for her, but now I feel like the US and the western world in general has caught up to where it’s more or less equivalent,” Duguid said.

“She has appeal in every continent – Asia obviously as her home nation; America as the place she was born and raised and probably most identifies with the culture; Europe where they are tennis-mad; and Australia where she is a recent grand slam champion.”

Duguid uses the word authenticity when describing Osaka. A woman with the confidence to speak her mind no matter the consequences, and who would be just as happy working in fashion and photography if she wasn’t blessed with the talent that has seen her lift a grand slam trophy on three occasions in as many years.

"It would have been cool to study that at college and have that experience," Osaka said. "I also love business and am very entrepreneurial so I would probably be pursuing that somehow."

"That is something my sister and I dreamt of doing from an early age so it’s awesome to see that dream become a reality," Osaka said of her partnership with the woman she grew up trying to beat.

"I guess for me I can’t think about tennis 24-7 and let it overwhelm me. I need an outlet to keep my brain fresh so that’s why I love pursuing other stuff.

“Tennis has given me that platform and privilege so I don’t take it for granted.”

Duguid says there is no difference between the public and private persona of Osaka. If she believes in something, she will say it. Or wear it.

“There is no filter and what you see is what you get,” Duguid said. “She is the present and the future – the epitome of Gen Z.”