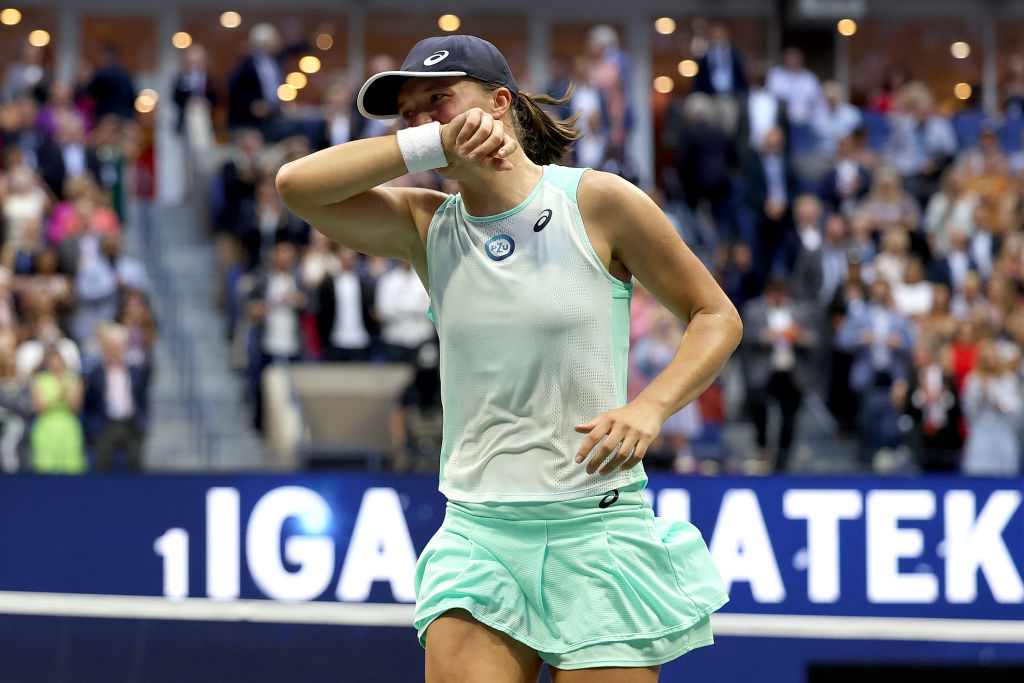 Iga Swiatek produced an impressive and gritty performance on Saturday evening to power past a stubborn Ons Jabeur 6-2 7-5 (7-5) in the US Open final to claim her third Grand Slam title.

The World No.1 made a lightning-quick start to the match, breaking Jabeur in the Tunisian’s very first service game before racing to an early three-game lead.

That sparked a reaction from the beaten Wimbledon finalist, who broke back quickly after some aggressive shot-making, though her resistance did not last long as she went on to lose the next six games.

It took just 30 minutes for Swiatek to claim the first set and the Pole looked set to run away with the contest when she broke Jabeur in the 28-year-old’s first service match of the second set – though that did not prove to be the case.

Swiatek, who is still just 21 years old, had not always looked at her imperious best in the previous two weeks in Flushing Meadows – dropping sets against Jule Niemeier and Aryna Sabalenka – and some signs of nerves crept in as the Grand Slam title started to get within her reach.

She suffered a setback when leading 3-0 in the second set, with several heckles and whistles from the crowd distracting her and helping Jabeur once again mount a mini comeback.

The Tunisian had the chance to level the scores on her serve but, as happened previously, Swiatek was simply too good and broke straight back to go 4-2 up.

Jabeur, though, was refusing to go quietly into the night and broke again herself before holding serve for only the third time in the match.

Then followed what felt like the defining game of the final; Jabeur produced the point of the match with a sublime drop shot and follow-up volley en route to setting up two break points, but Swiatek survived both – and several deuces – to move within one game of the US Open title.

She saw one championship point come and go, surprisingly changing her racket right before, and was dragged into a tie-break by the dogged Jabeur.

What followed was a nervy and often error-prone back-and-forth with a double fault from Swiatek bringing Jabeur within two points of the set, but a nerveless forehand down the line cancelled out the mini-break before the Pole was then handed her second championship point.

Once again she looked nervous, her first serve missing by miles, but Jabeur sent a return long as Swiatek fell to the ground in disbelief and joy before sharing some emotional scenes with her box.

Reacting to her win, Swiatek said: ‘I wasn’t expecting a lot. Before this tournament it was such a challenging time. Coming back after winning a Grand Slam is always tricky.

‘For sure this tournament was really challenging because it’s New York, it’s so loud, it’s so crazy, there was so many temptations in the city, so many people I have met who are so inspiring.

‘Ons, such an amazing tournament and season. I know we’re going to meet many more times and I know you’re going to win many of them, so don’t worry!’

The result sees Swiatek claim her first major hard-court title, with her previous two Slams coming at the French Open on clay, while Jabeur has now suffered back-to-back defeats in Grand Slam finals.

Swiatek is also the first woman to win Roland Garros and the US Open in the same year since Serena Williams in 2013.