Tick. Make that two ticks. The fourth of the seven wins Ash Barty needs if she is to triumph at the Australian Open was her most emphatic yet. It took her just more than an hour to defeat capable American Shelby Rogers 6-3, 6-4. It was classic Barty, a kindly thrashing.

Groundstrokes? Tick. Serve? Tick. Make that uptick. It’s perhaps the most improved part of her game, and it was crucial this night against a player who as Barty noted can hit you off the court if you give her a chance. She had for 20 minutes in a match between the pair here only 10 days ago. 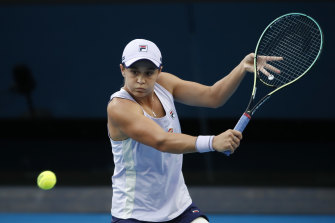 If Barty is surprised herself at how well she is playing after almost a year away from the circuit, she dead-pans it. “It’s just knowing that I put the trust in the work that we’ve done, more than surprising myself,” she said. “I think I’ve known that I’ve done the work. I have the ability to play at this level and then it’s just about going about all of our processes, our routines the right way. All of those came back quite naturally.”

Barty’s game has a timeless beauty welded to clinical study. When in a corner, there was always that backhand. Because she plays it one-handed, she can reach further and get to more. And because she mostly slices it, she leaves opponents nothing to play with. As Rogers could tell you. The subtlety means that she often dominates opponents without overpowering them. In this, there are echoes of Martina Hingis.

She kills with kindness. Rogers felt it. Everyone saw it.

Prospectively, Rogers was a tricky opponent. She has only been inside the world’s top 50 once, briefly. But since returning from a knee reconstruction two years ago that she thought might end her career, she has shown signs that at 28, her best is yet to come.

Her win-loss account is quirky. Last year at Lexington, she beat Serena Williams. In four previous visits to the Australian Open, she had won only one match – but that was against Simona Halep.

The pair had met in a preview in the Yarra Valley classic just 10 days previously. Barty’s craft had won that, but only after a match tie-breaker, and there was a period during the second set of that match when Rogers blew Barty off the court. Barty knew what might have been coming. She cut it off at the pass. She thinks as pretty a game as she plays.

“I knew it was going to be vital to serve well tonight,” she said. “That was something I really wanted to try and focus on, just to try and give myself a chance to be in control of more points.

“There was a couple of runs of points, runs of games in our match last week that Shelby was able to get on a roll and run away with it. I wanted to try and avoid that and just bring it back on my terms as much as I could and try and be the aggressor when I could.”

Rogers had hoped that the absence of fans would neutralise the context and work for her. “Maybe that’s in my favour this time,” she said, “that the Barty party won’t be present.”