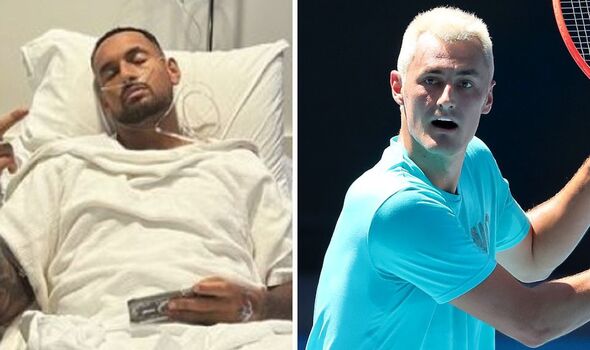 Nick Kyrgios’ old foe Bernard Tomic sent the world No 21 a surprising message after he underwent knee surgery which forced him to pull out of the Australian Open. The two Aussie players used to be friends early on in their careers but have since been embroiled in an ongoing feud, with Kyrgios previously branding the 30-year-old “the most hated athlete in Australia” but Tomic put their differences aside with a supportive post following Kyrgios’ procedure.

Kyrgios underwent an arthroscopic procedure to clean up his lateral meniscus and remove a paralabral cyst on his knee on Monday, seven days after he was forced to pull out of his home Grand Slam tournament. The 27-year-old shared photos to his Instagram account post-op and is now eyeing a comeback at the Indian Wells Masters in March.

Following his surgery, the Wimbledon finalist received a surprising message from Tomic – the former world No 17 who had beef with Kyrgios for years. The pair are known for trading blows on social media but this time around the 30-year-old appeared to wave the white flag as he shared his support for the 27-year-old in his recovery process.

“Despite our differences we go way back,” Tomic said, reposting Kyrgios’ hospital photo to his own Instagram story. “With @k1ngkyrg1os a quick recovery. Hope to see him back on the circuit soon.”

It comes just weeks after Kyrgios claimed that Tomic didn’t deserve an Australian Open wildcard after the world No 468 was snubbed by his home Slam and instead played an ITF event in Doha where he reached the final. A fan tweeted Kyrgios back in December to ask: “Surely Tomic deserves a wildcard?”

“It’s time for BT to just quiet down. He ain’t even playing anymore. I got years left.” Tomic then screenshotted Kyrgios’ words and shared his own Instagram story in response, sharing his own savage remarks as he wrote: “The only logical explanation is that I’m his idol. He’s always been in my shadow growing up.