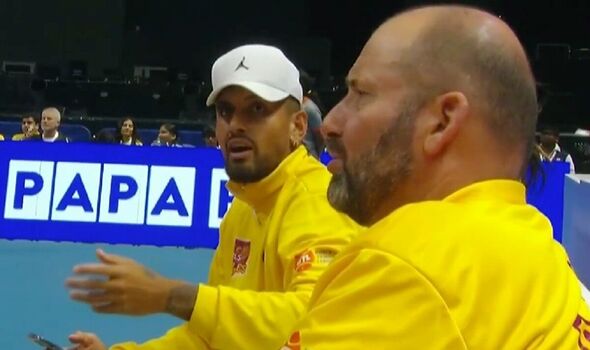 Nick Kyrgios made a bold statement on his 2023 goals as he claimed he wanted to “win a Grand Slam and retire”. The world No 22 discussed his aims for next season during the first day of the inaugural World Tennis League in Dubai and hinted that he would end his career if he finally won a Major title after reaching the Wimbledon final earlier this year.

Kyrgios is part of this week’s brand new World Tennis League tournament in Dubai, where he and WTA star Bianca Andreescu got off to a strong start for Team Eagles as they earned a 6-2 6-3 win over Team Kites’ Holger Rune and Genie Bouchard. The ATP world No 22 is also set to play the men’s singles match against Felix Auger-Aliassime on Monday but hd some downtime during the women’s match, where he discussed his 2022 season and goals for next year.

After winning the Australian Open men’s doubles title, reaching the Wimbledon singles final and picking up his seventh career title in Washington, the 27-year-old was asked whether he would sign for a repeat of this year’s results in 2023 but seemed unsure. “Would I sign again? Honestly, I don’t know about it,” he admitted.

With Kyrgios feeling positive after reflecting on his 2022 season, he then made an audacious claim as he said he was hoping to get a Grand Slam title under his belt and end his career. “I just thought I enjoyed it, definitely felt better on and off the court,” he continued.

“So hopefully I can just win a Slam and retire.” His shock revelation came while teammate Caroline Garcia was taking on world No 1 Iga Swiatek in the first women’s singles match of the tournament, and one thing that the Australian seemed happy to keep playing was team events as he praised the new World Tennis League former.

The seven-time title winner said: “Yeah I mean look, I’m a massive fan of the team environment, I think it’s pretty cool. It’s a good experience for the fans and the players, not many events where I can be seen next to Rohan Bopanna and Bianca Andreescu so it’s pretty cool, it gives tennis a bit of a different dynamic.”

The Australian Open men’s doubles champion also has his family with him this week in Dubai – including his nephew – and explained why they decided to join him at the new tournament. “Obviously coming from Australia I don’t have them with me often and I’m not going to spend Christmas in Australia so they decided to come here and just spend a couple days here and enjoy it,” he said.

“We’re doing a couple things and my nephew is here so it’s pretty exciting times.” Discussing life as a new uncle, Kyrgios added: “It’s going pretty good, he’s got probably one of the coolest uncles in the world, not gonna lie. It’s just good that the family are here, that’s for sure.”

The world No 22 will be back out onto court on Monday as he faces Felix Auger-Aliassime in the final match of the day, and he cracked a joke about the Canadian’s mentality. “I know big ol’ Felix is gonna be hungry and super, super serious like it’s a Slam final but we’ll have some fun,” he laughed.