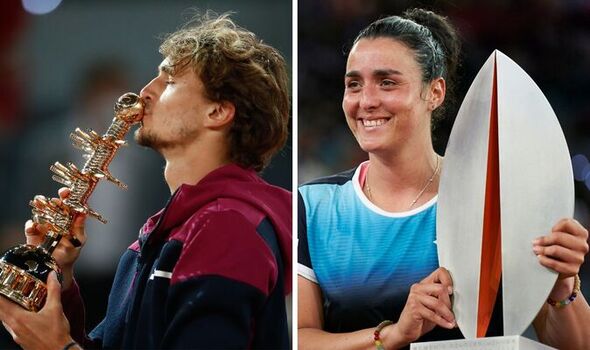 Fans watching this week’s Madrid Open have been quick to notice that the brand new trophy for 2022 is reminiscent of a vagina after Ons Jabeur won the women’s title on Sunday. And the new look has been even more amusing to tennis fans who noted that the previous trophy also resembled a penis, with some joking that it had “switched gender”.

Either Carlos Alcaraz or Alexander Zverev will be crowned the men’s singles champion at the Madrid Open on Sunday and will receive a shiny new trophy along with 1,000 ranking points and an £890,000 winners’ cheque. With the women’s champion already crowned in world No 10 Jabeur, fans have already been able to see the redesigned trophy in action and everyone has made the same observation.

“Is it just me or does the new Mutua Madrid Open Trophy look like a Vagina?” one fan tweeted after the Tunisian lifted her first WTA 1000 trophy, while another said: “The Madrid vagina trophy … it’s too much.” The previous Madrid Open trophy had drawn jokes for resembling a penis as a long, phallic shape with some spikes coming off it, and its new look now means the tournament has covered both bases when it comes to genitalia.

JUST IN: Nadal already in Rome as he forgets Alcaraz loss before French Open

Zverev could become the first player to own both versions of the trophy, as a two-time former champion and last year’s winner. But Alcaraz will be hoping to join Jabeur as the maiden recipients of the new “vagina” trophy or, as Matt from tennis outlet The Racquet put it, the “trophussy”.

The 19-year-old was feeling positive about his game heading into his second Masters 1000 final and said he had taken a “lot of confidence” from becoming the first man to beat Novak Djokovic and Rafael Nadal back-to-back on clay. “I know that I’m playing a really good game,” he said after defeating the top seed.

“Tomorrow I will go for it for the final as I did in Miami. And yeah, really really happy to be able to play a second Masters 1000 final.” Meanwhile, Zverev downplayed his chances against the home favourite despite being a two-time former champion with a 2-0 head-to-head against Alcaraz.