Marked for greatness, age THREE! After getting his first racket as a toddler, US Open champ Alcaraz caught idol Nadal’s eye at 13 and played with Federer at Wimbledon as a junior… now, as the youngest EVER World No 1, could he outshine them both?

He held his first tennis racket at the age of thee and sixteen years later, it’s the US Open trophy, a check for $2.6million and the World No 1 ranking that is in his grasp – the youngest to ever do it.

Carlos Alcaraz’s rise to the summit of world tennis has been electrifying and it started in the tiny village of El Palmar in Murcia, Spain.

His dad and grandfather were keen players – his father was even a director at a local tennis academy – so Alcaraz and his two brothers had little choice in what was going to be the sport for them.

He was born in 2003, just two years before his idol Rafa Nadal won the his first Major, at the French Open. Their paths would cross for the first time when Alcaraz was 13, posing for a picture together after winning a competition on the Rafa Nadal junior tour.

Alcaraz even outlined at that event how he wanted to grow up to be like Nadal as a professional player. 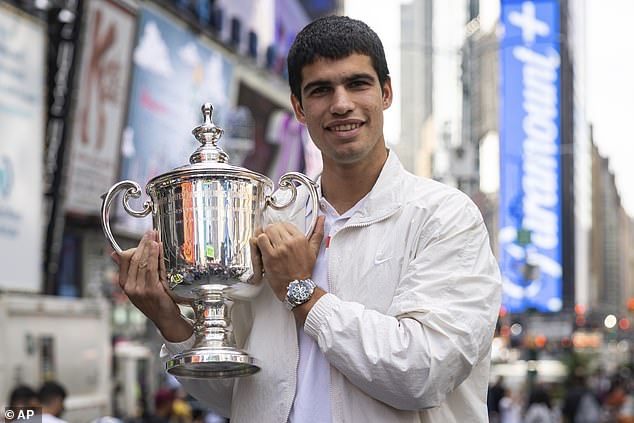 Carlos Alcaraz poses with the US Open trophy, a day after his victory in the final in New York 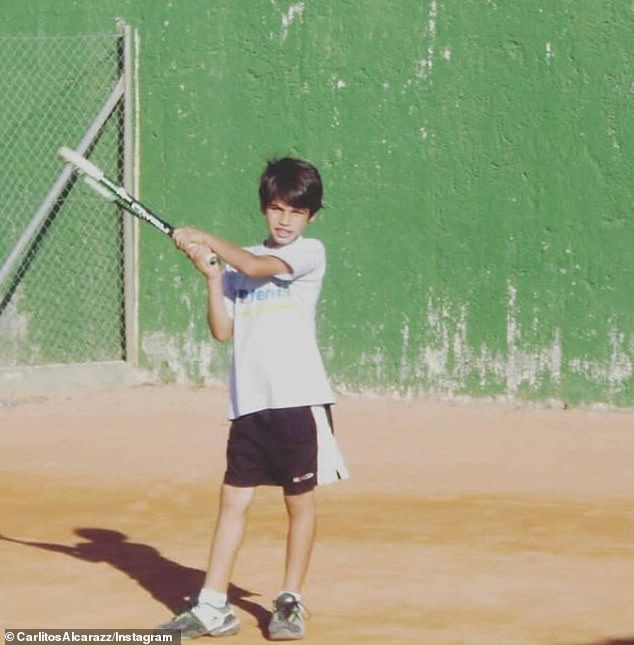 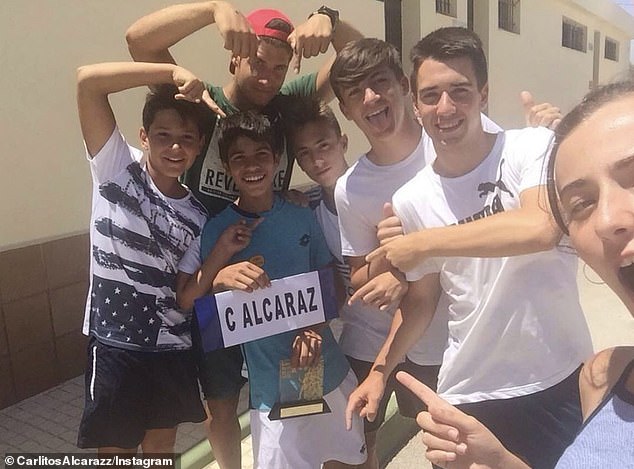 He’s beaten him this year and overtaken him now – as well as being the youngest ever World No 1, Alcaraz is also the youngest Grand Slam winner since Nadal’s 2005 French Open and the youngest US Open winner since Pete Sampras in 1990. Esteemed company indeed.

In 2019, Alacaraz’s potential was well known. But he was still graced by Roger Federer’s greatness at Wimbledon and had a chance to hit with the eight-time SW19 winner at the tournament itself.

Captioning a picture alongside the Swiss, Alcaraz wrote: ‘A dream come true.

‘It has been a proud moment to be able to warm up in Wimbledon wit the best player in the history of grass tennis. Thank you very much Roger Federer.’

The teenager has so far kept much of his life away from sport private. His rumored girlfriend, Maria Gimenez, is from Murica and a tennis fan too – she plays at a local club and while Alcaraz is away conquering the globe, he still passes praise onto her when he can. 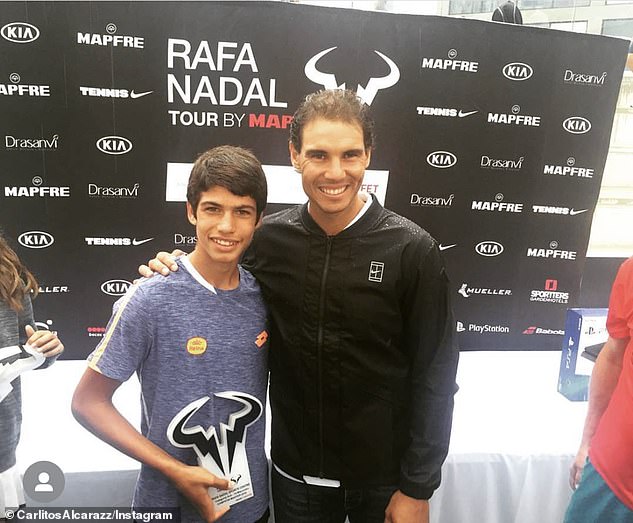 At 13, he caught the eye of his idol Rafa Nadal after winning an event on his junior tour 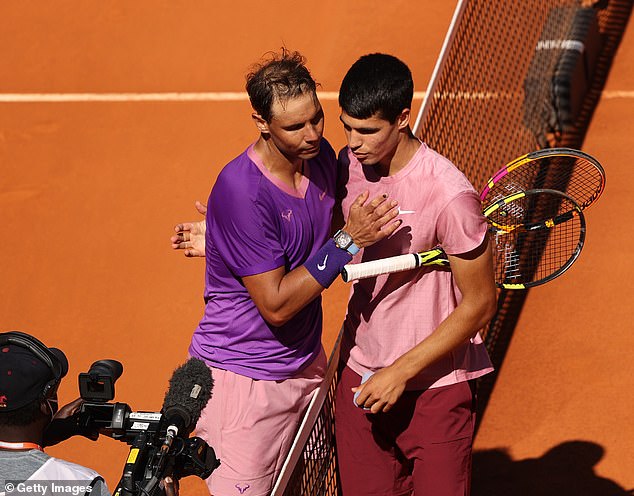 Since becoming professional, Alcaraz has played against and beaten his hero Nadal 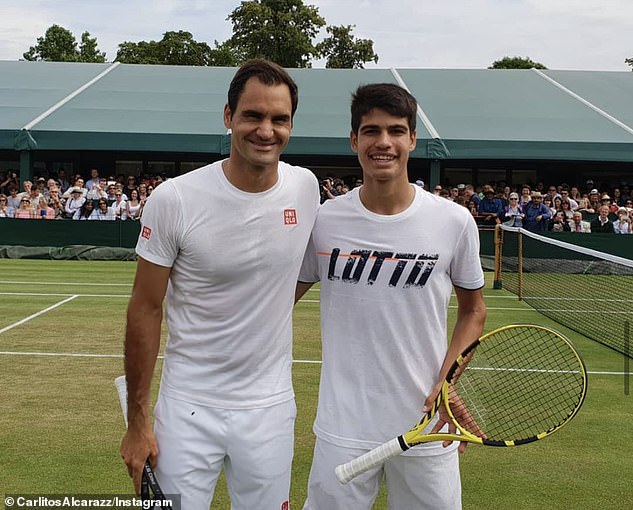 In 2019, Alcaraz hit with Roger Federer at Wimbledon as he began to make a name for himself

Last year, when Gimenez shared a picture of her hitting a right-handed forehand on her Instagram, Alcaraz jokingly commented: ‘Next time you’ll surely beat me with that right one!’

She was not believed to be in New York for Alcaraz’s tournament and does not yet watch from the stands when he plays.

He is a huge Real Madrid fan, the famous Spanish soccer team, and was at the Champions League final at the Stade de France for his team’s gritty 1-0 win against Liverpool.

Alcaraz also got to meet the Real players at their Santiago Bernabeu stadium in the summer after winning the Spanish league and posed with the trophy. But its a far more important piece of silverware that he celebrates with now.

His corner is fronted by his coach, Juan Carlos Ferrero, an esteemed player in his day who won the French Open the same year Alcaraz was born, in 2003.

They have worked together for three years, since Alcaraz was 16. A statement from Ferrero’s academy at the time described Alcaraz as ‘the greatest promise of Spanish tennis today.’ 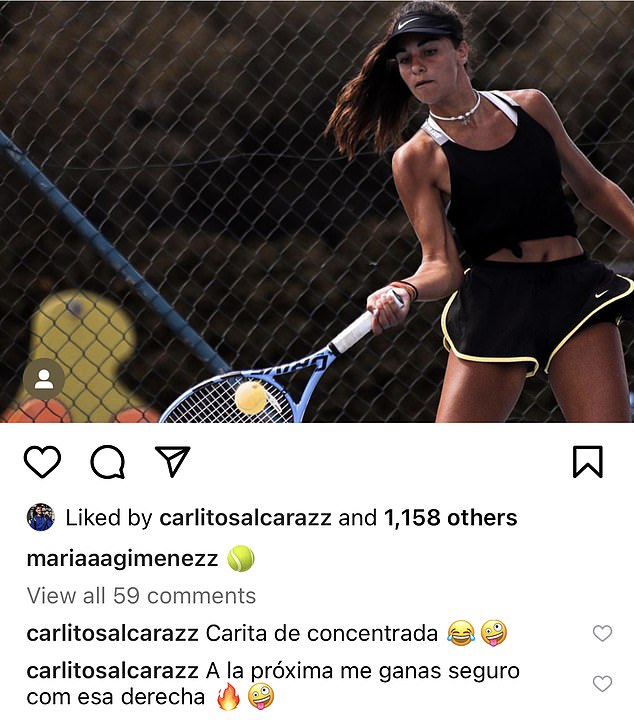 He is believed to be dating Maria Gimenez, who lives is in his home region of Murcia – she is also into tennis and here, Alcaraz is seen joking with her about how her forehand is so strong, she will beat him in a match – ‘Next time you’ll surely beat me with that right one!’ he says 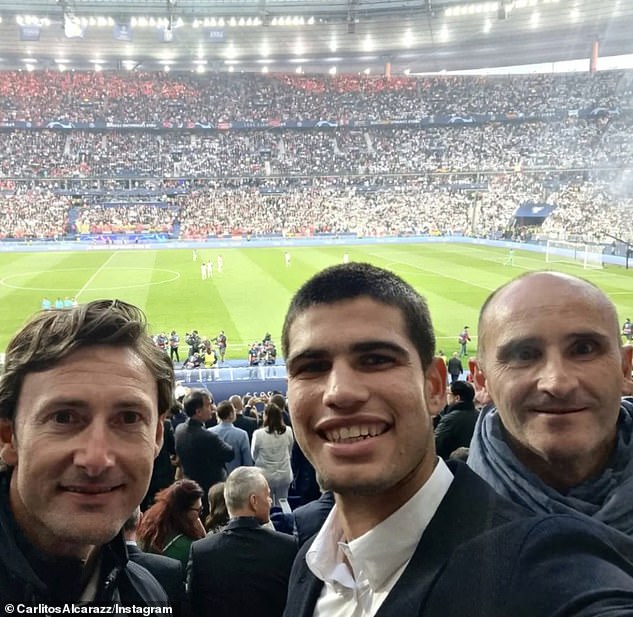 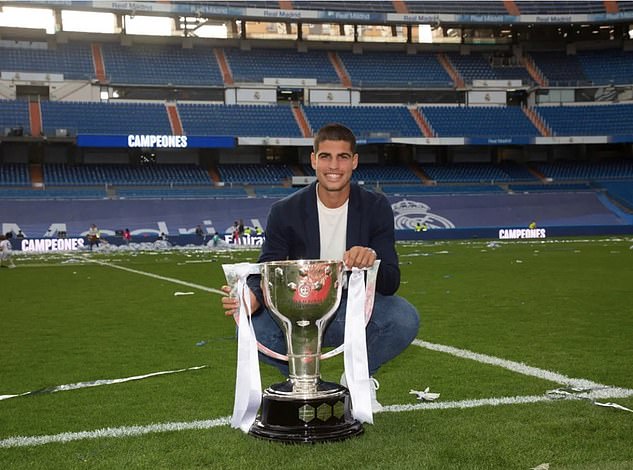 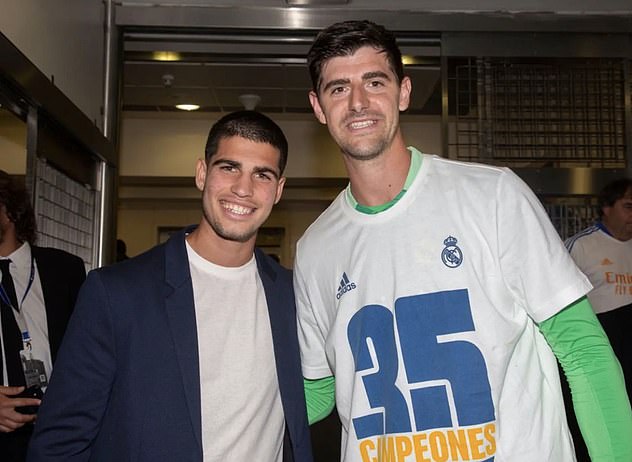 Alcaraz also got pictures with a number of the team, including goalkeeper Thibaut Courtois

It was perhaps not the boldest of statements to acknowledge his potential at 16 but few could have ever anticipated that he would be World No 1 by now.

His next steps should be viewed with a touch of caution. He is still only 19 and we have seen Emma Raducanu work carefully with balancing burden of expectation on her shoulders after US Open glory last year at 18.

But it was Raducanu’s emergence from, more or less, the middle of nowhere that made her story particularly stunning. Alcaraz was the No 3 seed at Flushing Meadows and for good reason – his rise has been steady and consistent.

‘All gas and no brake,’ was how the US Open’s Instagram account described his display after the thrilling semi-final against home favorite Frances Tiafoe.

It was about right – and with such a tireless approach to his game, it will take something drastic to shift Alcaraaz from the very top.