Daniil Medvedev produced a masterclass in shot-making across five hours of exhilarating tennis to help Russia escape the ATP Cup’s “group of death” and bring Australia’s campaign to an end.

As the Novak Djokovic border saga went to the law courts, Medvedev led the defending champions to 2-1 win over Italy on the tennis courts.

Medvedev has arrived in Sydney in mid-season form and if Djokovic’s legal challenge is unsuccessful, the Russian will rightfully start favourite at the Australian Open on Monday week.

Medvedev was at his imperious best in a must-win rubber against fellow top-10 star Matteo Berrettini after Jannik Sinner held up his end of the bargain for Italy in the first match of the tie.

The Russian was in control throughout the 6-2 first set, but Berrettini lifted his level from the start of the second. The Italian pinched an early lead in the second-set tiebreak and held on as Medvedev fought back, forcing a decider.

But the US Open champion wasn’t going to be denied. He broke Berrettini to take a 2-1 lead and as the world No.7 played some of his best tennis to try and stop the tie from going to a decisive doubles leg, Medvedev kept finding an extra gear. 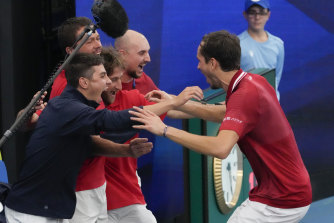 He played some incredible shots to keep Berrettini at bay and played up to his corner in the aftermath, indicating that even he knew the standard of tennis was absurd.

“Those first two points [of his final service game] were exceptional. It was crazy. I want to go and watch it,” Medvedev said after the match.

“Here, you have this energy where you entertain with the team. I wanted to show them that I was here and trying to lead us to this win.”

Medvedev’s performance left the winner of the “group of death” – which had already seen Australia eliminated on a match countback – to be decided by doubles.

The world No.2 returned alongside Russian No.2 Roman Safiullin. Italy also opted for their best two players, sending Berrettini and Sinner to Ken Rosewall Arena with a place in the semi-finals on the line.

The Italians initially had the upper hand. They won the first set 7-5, but were broken early in the second and could not break back. That left the fate of Group B to be decided by a 10-point match tiebreak.

Once again, Medvedev stepped up. Russia claimed the tiebreak 10-5, and booked their place in the final four.

“We were in a tough position,” Medvedev said. “Especially when Jannik was just hitting the balls on the line. Every changeover, every shot we had to make, we tried to discuss it to see what we could do better and how we could improve in the match. It worked very well. We had some crazy rallies. It was an amazing match.”

In Group C, Great Britain kept their final four hopes alive with a 2-1 tie win against the United States.

Daniel Evans and Taylor Fritz claimed their singles rubbers, taking the tie down to the doubles, where the Brits prevailed in a 10-8 match tiebreaker. But their fate depends on the outcome of Canada’s clash with Germany.

If Germany prevail, Great Britain will progress to the final four. If Canada claim the tie, they will emerge from Group C.