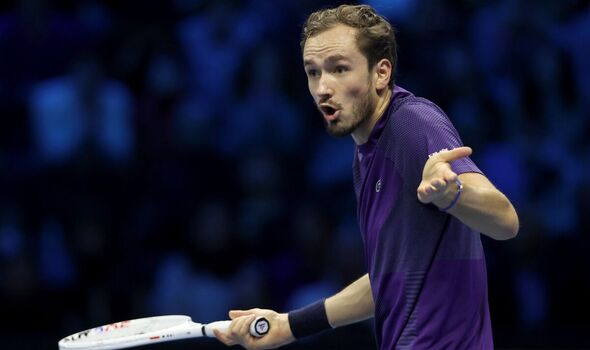 Daniil Medvedev claimed he “screwed up” in his ATP Finals matches against Novak Djokovic and Stefanos Tsitsipas after ending the season on a four-match losing streak. The world No 7 served for the match on both occasions and ended up losing in a tiebreak, and has now reflected on his final tournament of 2022 after savaging his performance at the time.

Medvedev had a mixed 2022 season, starting the year with a two-set lead over Rafael Nadal in the Australian Open final before ending it with a 0-3 record at the ATP Finals after reaching the final the year before. Despite reaching No 1 in the world for the first time, it was an underwhelming year overall for the man who won a Grand Slam in 2021, and he has now reflected on his difficult end to the season.

Asked for his feedback on his final tournament of the year by his coach during a conversation with Tennis Majors, the Russian simply responded: “I screwed up, it’s as simple as that. I served twice for the match.”

But Medvedev is now more positive about his two tough battles in Turin, where he served for his second round-robin match against Tsitsipas at 5-4 in the third before going down 6-3 6-7(11) 7-6(1), then finding himself in the same spot against Djokovic two days later – serving for it at 5-4 in the third and losing in a tiebreak after three hours and 11 minutes on court in what was essentially a dead rubber with the Serb through to the semi-final and the world No 7 eliminated in the group stage.

At the time, the 26-year-old claimed he could take “no positives” from the matches and had a simple answer when asked why he lost the two matches – “I sucked.” But a month on, Medvedev is happy to have some high-quality performances under his belt despite “screwing up” his chances to win both clashes and is more eager than ever to remain with his long-time coach Gilles Cervara in a bid to improve next season.

“It remains obvious from my side that we have to continue,” the 15-time title winner said of his five-year partnership with the Frenchman. “The season was just ‘not so good’, it was not rotten. I feel that together I can still improve as a player and he as a coach.”

The Russia’s words came as he and Cervara revealed that they operated on one-year, renewable contracts in their partnership, with Medvedev quick to keep working with the 41-year-old when they checked in after the US Open, where he lost his world No 1 ranking and was knocked out by Nick Kyrgios in the fourth round despite being the defending champion.

Despite his struggles this season, the world No 7 maintained that “It’s always been easy to renew [the contract]” and didn’t place any blame for his ATP Finals performance on his coach. “In Turin, I served twice for the match and I lost three times in the group stage 7-6 in the third. But it’s still three high-level matches,” he said. “It’s not up to Gilles, but to me to do better. We’re working well, it will pay off.”