In a triumph of absurd timing that embarrassed the sport, the former world No.1 defeated Australia’s Thannassi Kokkinakis in the second-latest finishing grand slam match in the history of the tournament.

It might have been the greatest comeback of Murray’s career – it was certainly the longest of his career – but it was witnessed by a precious few.

At 35, with a tin hip and down two sets and break points in the third, he found a way to fight back and win just as it seemed the game would run into breakfast TV.

“Look, it’s obviously amazing to win the match, but I also want to go to bed now,” Murray said.

“Tennis needs to change this business of playing at three, four in the morning … I don’t know how it’s beneficial for us a match like that you know?

“We come here now after the match and that’s what the discussion is rather than it being like, epic match … you know, it ends up a bit of farce.

“Amazingly people stayed until the end and I really appreciate people doing that and creating an atmosphere for us at the end. I really appreciate that. And some people obviously need to work the following day and everything. But if my child was a ball kid, you know, for a tournament, you know, they’re coming home at five in the morning. As a parent, I’m snapping at that. 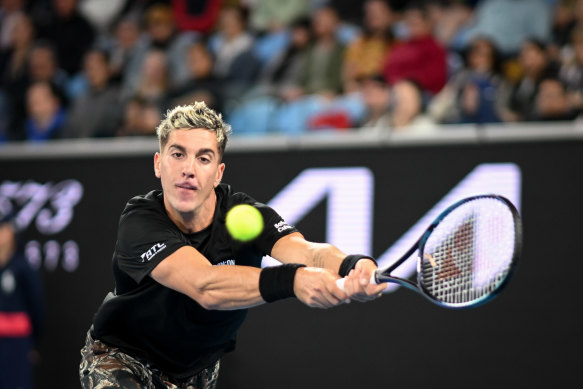 “We talk about it all the time, and it’s been spoken about for years. But you know, when you start the night matches late, and have conditions like that, these things are going to happen.”

Lleyton Hewitt and Marcus Baghdatis’ match in 2008 that finished at 4.34 am remains the latest finishing grand slam match.

Kokkinakis played brilliant tennis but will feel he missed a chance. At 5-3 in the third set serving for the match, he was broken. It went to a tie-break and he had a couple of bad misses on big points.

He could have closed out the win but didn’t. Afterwards he was despondent and less expansive than Murray in his thoughts. 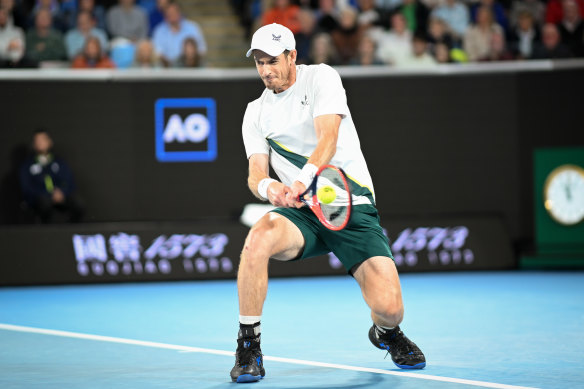 Andy Murray during his match against Thanasi Kokkinakis.Credit:Eddie Jim

He did not speak after the match, did not do a press conference he was so physically and emotionally exhausted, but he sent out a tweet that summed his feelings. They were succinct.

“This f–king sport man,” he tweeted.

Kokkinakkis’ first round match spanned two days after rain repeatedly halted it. His next also straddled two days without interruption.

For all of the ridiculous timing to start what always looked to be one of the best matches of the Open at 10.22pm the marathon contest that followed was superb not only for the fact that it was of epic proportions at nearly six-hours long, or that it finished nigh on breakfast, but the tennis was of the highest order.

It was a reminder that Kokkinakis’ career has been hijacked by injury but he is a player whose ranking at No.159 does not reflect his talent.

If you can have a career breakthrough match in a loss then Kokkinakis had it. He will rue chances to close out the match in three sets but he also fought out that fifth set.

Murray drew eight break points on Kokkinakis’ serve in the fifth set and the Australian managed to save seven of them. But you only need one. Murray got his one and it was enough.

The tennis the pair played that had started at a high standard only got better the longer the match went.

As the match dragged on into the wee hours the tiredness demanded adventure from the players. Kokkinakis rolled his ankle in the fourth set, Murray grabbed at his abdominal muscles repeatedly throughout the match. So they tried to cut points short by going for bold expansive shots. And they landed them.

The power on serve and return from both of them only increased as the hours stretched. They ran balls down. Murray sensed an opening on Kokinakis’ game and started rushing the net in the late sets. It worked. It also made for dynamic change-up tennis.

It was tennis of such a calibre that it raised the idea of whether it was actually a product of the silly hour it was being played at and the tiredness of the two players.

The absurdity of tennis rules angered the players further. Murray was denied toilet breaks despite playing for nearly six hours and drinking throughout.

Kokkinakis lost his cool when he was penalised for a time violation on serve after waiting for noisy spectators. He argued at length with the umpire.

Distracted he went on to lose the game and smashed his racquet in anger. He was issued a warning for racquet abuse.

That warning prompted Murray to ask the chair umpire at the set break how it was a player could be warned for racquet abuse but nothing was said of the swearing by Kokkinakis when he argued with the umpire over the earlier time violation. He had a point.

Matches like this can be regarded as epic just by virtue of their duration or the hour they are played and this was certainly true of this match, but it was beyond that.

It was great because of its epic nature.

It was great because of the drama.

It was great because of the fact it was a former world No.1 hobbling around on metal hips like an even older man than he is.

It was great because it was a kid who had been largely a sidekick who stepped out of a shadow and delivered the performance of his career.

It was great because the tennis was great.

You would have loved it.

For daily updates of all the tennis action during the Australian Open, sign up for our Sport newsletter here.