The intrigue surrounding the fitness of world No.2 Rafael Nadal has not subsided, with the Spaniard quietly practising away from the public gaze a few days out from his round one Australian Open match.

Only photographers were allowed to get a short glimpse of Nadal training on Saturday as the 20-time grand slam winner battles to overcome a lower back injury.

The public and journalists were kept at a distance with photographers only allowed a five minute window to shoot some pictures, but a source lucky enough to see Nadal step out onto court said he was not noticeably impeded. 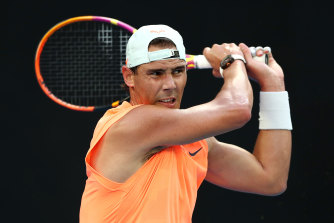 Nadal was practicing on John Cain Arena with 17-year-old compatriot Carlos Alcaraz , who some have anointed as the heir apparent to the Spanish legend.

The 34-year-old beat Dominic Thiem in an Adelaide exhibition match on January 29 but pulled out of all three of Spain’s ATP Cup ties because of injury.

He was courtside at all of those clashes supporting his country until they were knocked out by Italy in the semi-finals on Saturday.

Nadal has trained on each of those days and Australian Open tournament director Craig Tiley said the No.2 seed was on track to try and win his 21st grand slam, eclipsing Roger Federer who he is tied with on 20.

“I see Rafa every day, he hit for an hour-and-a-half [on Friday],” Tiley said.

“Out of extra caution he chose not to play in the ATP Cup, even though Spain are in the semi-finals playing against Italy. I’m sure he’ll show up and provide moral support for the team.

“He’s out practising and he’s indicated he’ll be ready. He’s protecting his opportunity to win a 21st grand slam.”