After Rafael Nadal confirmed that he is retiring from Wimbledon due to injury ahead of his semi-final with Nick Kyrgios, the Australian broke a SW19 record and became the first player in the Open era to receive a walkover into the tournament’s final. Kygios will face either reigning Wimbledon champion Novak Djokovic or Brit Cameron Norrie on Sunday, as the two play for a place in the final on Friday.

Clare Balding confirmed Kyrgios’ new record on the BBC. Nadal confirmed he would be retiring from the tournament in a press conference on Thursday evening. “Unfortunately I am here because I have to pull out from the tournament,” the Spaniard told reporters. “The 22-time Grand Slam winner, whose efforts to make it 23 Majors will have to wait until the US Open, adds: “I was thinking the whole day about the decision to make but I think it doesn’t make sense to go [on court].

“Even if I tried a lot in my career to keep going in very tough circumstances. I think it’s obvious if I keep going the injury is gonna get worse and worse and that’s the thing that I can say now.

“It’s not only that I can’t serve at the right speed it’s that I can’t do the normal moment to serve. To imagine myself winning two matches… and for respect to myself in some way, I don’t want to go out there and not be competitive enough.” 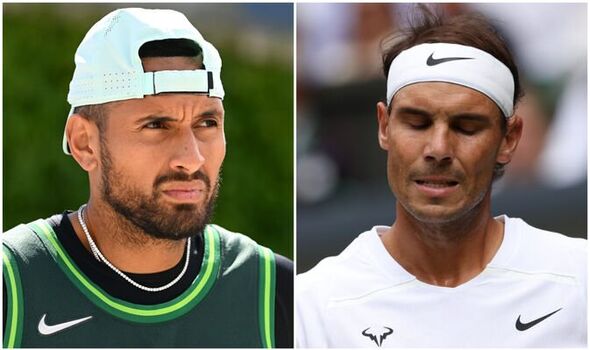