Novak Djokovic admitted he suffered an “awkward moment of deja vu” after unintentionally hitting a ball which smashed into the head of a line judge at Roland Garros this morning.

However, he had a heart-in-mouth moment when he stretched for a forehand in the first set and the ball flew off the frame of his racquet before spearing into the unsuspecting baseline judge sitting nearby.

The Serb went immediately to the official to check he was unhurt. The incident came just weeks after Djokovic was defaulted at the US Open in New York for swiping angrily at a ball which hit a female line judge, standing just behind him, in the throat.

That disqualification remains the only defeat Djokovic has suffered all year.

“My gosh, it was very awkward deja vu. I’m actually trying to find the linesperson and see if he’s OK because I saw he had a little bit of a bruise, like redness, in that place in the head where the ball hit him,” said Djokovic, who has now reached the French Open quarter-finals for an 11th straight year.

“I hope he’s fine. I mean, he definitely dealt with it in a very strong and brave way. But it was a hit because I was very close.

“Obviously because of what happened in New York, people I guess are going to make the story out of this. It has happened to me and to many other players in the last 15 years that I’ve been on the tour.

“I’ve seen it a lot when the ball ricochets from the racquet and the frame, hits someone in the stands, or someone that is close to you or a line umpire. Yeah, it was a very awkward situation.”

Djokovic, chasing a second title in Paris and 18th career grand slam, will face either Spain’s Pablo Carreno Busta or unseeded Daniel Altmaier of Germany for a place in the semi-finals.

Carreno Busta was the player who benefited from Djokovic’s US Open fourth round disqualification.

Djokovic, who hit 44 winners past 15th-seeded Khachanov, has yet to drop a set in the tournament, losing just 25 games in four rounds.

“It was a tight match and I am happy to win in straight sets,” said the top seed, who has now reached 47 quarter-finals at the slams and is bidding to become the first man in half a century to win all four majors twice.

Djokovic has a 3-1 career edge over Carreno Busta, the 17th seed, and has never played Altmaier, the world No. 186, who came through qualifying.

Should he defeat the Spaniard, a quarter-finalist also in 2017, Altmaier would be the first qualifier in the last eight at Roland Garros since Marcelo Filippini in 1999. 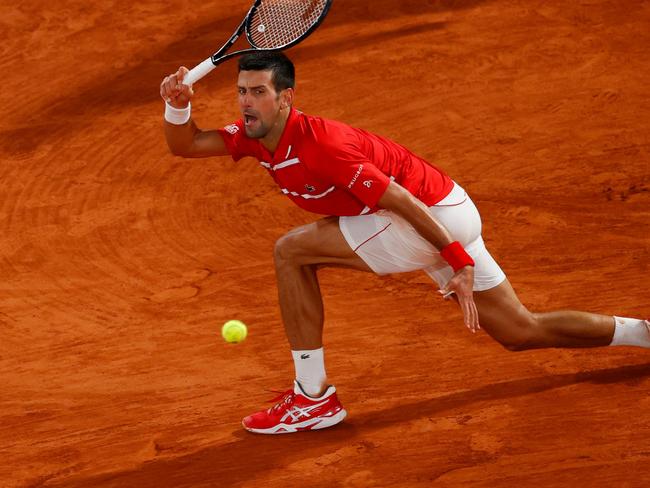 Not all of Djokovic’s forehands go where he wants them to.Source:AFP